Hello everybody, and welcome to an Old-Skool battle report where Adam pilots the brand spanking new and as of playing, unreleased, Alpha Legion against his arch-nemesis: Danny and his Genestealer Cult! 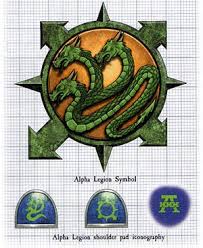 Let’s take a look at the Lists real quick and see what toys were brought out to play!

14x Acolytes with 4 Saws and an Icon 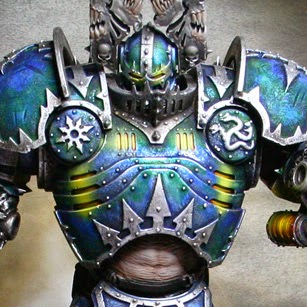 So Danny is forced to go second, which is good and bad.  It gives him a chance to strike last at the mission, which GSC really enjoy doing, but because of the rules for Subterranean Uprising, he has to deploy them the first turn, so several of his biggest hitters are exposed to the Dreadclaw drop.   Danny has a unit in each corner as well as his most durable unit, the Abberants with a Primus and Iconward for 4+ FnP, in the center taking the Relic already.

Danny hides his other big units back into the shadows, and he waits for the inevitable drop.  Two of Adam’s Dreadclaws come in and easily pick up a squad of Metamorphs.  When it is Danny’s turn 1, he sends most of his units except for those guarding the relic and holding an objective back into the shadows.

At the start of turn 2, Danny is already down in the Maelstrom but holding on.  Adam’s turn 2 sees his Cabal-star come in along with a single Heldrake and the last Dreadclaw.  All of his standard infantry have decided to wait off table.  One Dreadclaw eats another small unit of acolytes while the other two Dreadclaws fly and Heat Blast the unit holding the relic.  Much to Adam’s chargrin, one Dreadclaw blows itself up in the process, and not a lot of damage is done to the Abberants.  The Heldrake also doesn’t do all that much damage.

Danny’s reserve rolls were mostly in his favor as his First Curse came in. Danny again tried to spread all over the board to mitigate the damage done by the Dreadclaws and the incoming Heldrakes. Danny has absolutely no answer to either, so he has to wait and hope for some good Cult Ambush rolls next turn.   Since Danny rolled the best Warlord trait, choosing the result of Cult Ambush, his First Curse lines up for a charge right at the Bikes.  Danny also rolls another 6 for his anti-armor Acolyte squad, and they go right for the Dreadclaw that is still on the ground.  Danny makes both of his charges easily, losing a Genestealer in the process but making it into combat while his acolytes annihilate the grounded Dreadclaw.

In the combat, Adam challenges with a Sorcerer, and Danny’s Patriarch only manages a single wound.  After all the attacks and said and done, Adam is left with a sorcerer, his lord, and several bikes, but they made it through.  The Black Mace did some real damage to the Genestealers, and it was a smart pick for Adam. This is a perfect place for Adam to use the Alpha Legion artefact that lets him move 3D6 out of combat in his own movement phase, but…he forgot to bring one.

In Adam’s Turn 3, his other Heldrake finally comes in, but none of his infantry (which is really helping him out).  He uses his flyers to continue to wrack up damage on the Abberrant unit and the Neophytes. At the end of his turn, Danny’s First Curse finishes off the Lord and his unit, but Danny doesn’t get Slay the Warlord because oh-wait, Alpha Legion don’t give it up without wiping every character.  Danny spends most of him time trying to do damage to what he can, but his little Acolytes can’t pop a rhino.  He knows that Table Quarters is real in this game, so he is trying to control each part of the board as he knows he is losing Maelstrom.

In Turn 4, all of Adam’s infantry walk on, and all of them on the same side.  Adam castles up in two different parts of the board, well away from Danny’s biggest units.  His flyers take off to come in where needed in Turn 5, and in general, he starts to trying to play for the mission rather than the kill.  In Danny’s Turn 4, he retreats his Abberrants from the relic to heal that sweet D6 models back to take it on Turn 5, especially since Adam has no fast movers to come and claim it now the bikes are dead and his rhino (with 1 hull point left) is in the far corner of the table. He tries to clear out a unit of Marines that walked on near a corner, but of course, his small Genestealer squad died to Overwatch and striking last in combat.  Now it is just a waiting game to see what happens in Turn 5.

Adam’s Turn 5 saw him mow down another small Acolyte unit to claim a corner, and with two units and a rhino holding the other corner, he was pretty secure.  His last Dreadclaw came in and stopped right near the Relic, but he couldn’t land, so now he had to wait for Turn 6.  Danny’s Turn 5 was a bigger success.  Using actual witchfires, he managed to kill a squad of CSM hiding in ruins and then charge two more with his First Curse to claim another table quarter.  The Abberrant squad came back and camped the relic, and the roll came down to end, and well, it did on turn 5.

So at the end, Adam took Maelstrom and First Strike with Danny taking Primary and Table-Quarters.  We have ourselves a good old fashioned draw at 5-5.

Overall, if Adam had remembered to buy a critical piece of wargear and escape from The First Curse, it would have been a different game entirely.  Either way, it was a hard fought match between two armies that want to play the mission.

We hope you enjoyed this brief battle report, and as always, think about hitting up that Patreon page, so we can continue to produce all this wonderful content. 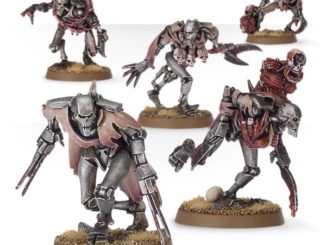