Hey all, Danny here as usual, and today, I am going to be topical as hell and jump into the newest spoilers about the upcoming Imperial Guard/Astra Militarum book.  Namely, tanks! 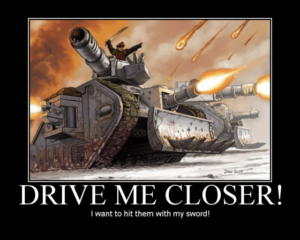 So, IG (I’m old; they are IG to me) is not only coming down the pipe fast, but we get the return of distinct Regiments and their rules.  This alone is a huge boon:

Variety – When I started 40k some 20+ years ago, I still remember seeing three different IG armies at a store, and each one was different.  It was awesome, and some of my earliest models were Catachans because damn, I wanted an army of Rambos.

The fact that they also each have a special rule and a special stratagem dedicated to them means that we have meaningful variety on the table.  A Catachan army will play differently than a Mordian.  While they won’t be entirely new armies, it definitely creates a great level of nuance and depth that will keep things fresh.

Let’s not forget that this also means the hobby side gets to flourish and benefit from being in theme. Instead of everyone just being more or less the same with different paint jobs, now there is a real in game purpose for units to appear different from others.

But, one of the biggest spoilers for me is this: 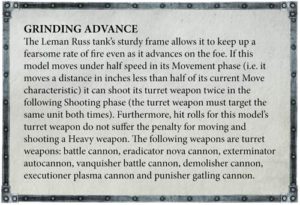 Good lord, that is a big boost.  So far, this is the strongest buff I’ve seen in 8th edition to just about anything.  Let’s breakdown why:

The fact that you get to fire twice means quite literally, you are doubling your offensive output.  For 20 points, you are now getting 40 S5 D1 shots from a Punisher, and that is just…wow. Who else can get 40 S5 shots from a single weapon at 20 points?  The humble battle cannon becomes a real threat with 2d6 shots at a long range, so you don’t need to move much anyway, and again, for 22 points, not bad.  Even the good old Executioner Plasma Cannon is back with far more shots, and while that is more room for 1s if you overcharge, that is a lot of high quality dakka flying out at your opponent.

For about 160 points with just the turret weapon, you are getting a lot of firepower on a T8 12W 3+ chassis.  While the sponson weapons do not get any benefit except for the no longer having the moving penalty, they are still a cherry on top of a death sundae. 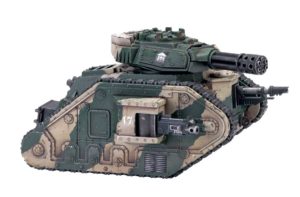 GW mentioned a slight points adjustment, and coupled with double efficiency, this is just more money in the bank.  Even a 10-15 point reduction will add up considerably, especially if weapons are also reduced.  If you can rock a squadron of Punisher-Russes for under 450, that’d be amazing and would absolutely be a great answer to infantry spam.   Hell, 120 S5 shots a turn in an answer to a lot of problems.   They really should look at the autocannon though because that is still far too expensive to be worth it. 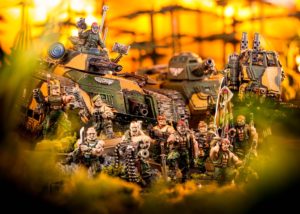 Tank commanders giving either a reroll to 1s or shoot and pop smoke is just delicious.  Even if only those 3 orders remain, that is still a nice boost to the accuracy of the guns and the durability of the tanks.  While a reroll 1 on a 4+ BS model is only an 8% increase in accuracy, it is still there, especially when shooting twice, you are getting more and more out of it.

Let’s not forget all the cool regiment traits that we are seeing. Catachan Tanks should be a common sight as being able to reroll a die in the number of shots for heavy weapon makes them even more efficient.  That makes even the humble battlecannon far more reliable, and if moving at half speed, a humble Leman Russ is now pumping out as many shots as a Knight, for far less points.  With the Mordian trait, you can get Overwatch on a 4+, which makes charging the tanks a risky proposition for any unit that isn’t super durable.  Small units of Berserkers and even a big unit of Genestealers might suddenly find themselves too crippled to do much.

Who knows what other combos will come out once we see more stratagems and other regiment traits? 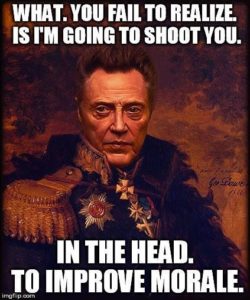 Again, we are talking about models that are T8 with 12W, so they are pretty damn durable.  A lot of other shooting armies are going to struggle to consistently do damage to these big toys, and even melee armies are suddenly going to have rely on 6s to wound.  This means that not only are you producing a solid amount of firepower, but you are quite resilient to the return fire, so the attrition game is solidly in your favor.

One of the main problems with tanks in the index was that they simply did not produce enough heat for their points.  They were resilient, sure, but they couldn’t punch through swarms or even other heavy threats, but with essentially double shots on the big guns, they are far more a threat than before with the same durability.

Will this warp the meta? It should.  We know that conscripts are getting nerfed, but we don’t know how precisely.  While I am sure they will be a useful unit as being able to take 40+ bodies for under 150 points is still damn good, especially for tanks that are going to be moving slowly to get some double power, we may see the return of the Leaf Blower list.  Armored companies are going to be back in a big way, and suddenly take 5+ tanks is not just a recipe for disaster.  Will a pure armored company work? I don’t know, probably not as there is no Leman Russ that really guarantees killing heavy targets as the Vanquisher is still too few shots, but I wouldn’t be shocked to see at least 3 Punisher-Russes running around and wood-chippering through infantry spam, and of course, drop squads of Mordians to murder characters.

Thanks as always for reading, and as usual, check us out on Facebook, make sure to hit up our Stream for all sorts of content, our YouTube, and of course, the Patreon.  Without that support, we can’t give away cool stuff. 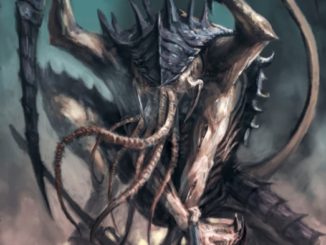 Tyranids on the horizon: A cautionary tale of hope