Hello members of the Fire Caste! Last time I wrote about T’au Troop Choices. For my very bold predictions, you can find that here!

This week the discussion is about the Fast Attack choices for T’au. Let’s get to it! 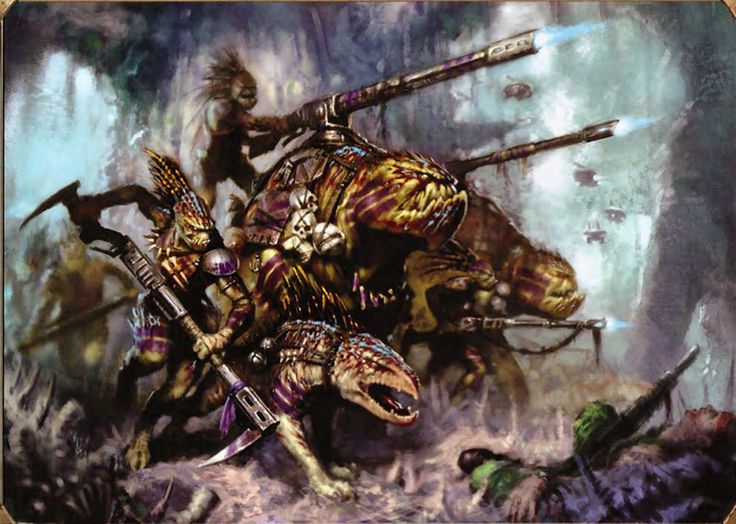 There’s probably this and one other image that’s about Kroot Hounds on Google.

Kroot hounds are pets so loyal to Pech that they decided to get in on the bloodshed too. While not a killer assault unit, these units are much better at it than regular Kroot (and much cheaper too, a full squad of 12 coming in at 48 points!)

While they don’t have the 7” vanguard move kroot have to really keep away the baddies, Kroot Hounds are able to move 12”, making them a mobile wall when you need them to be. As with my advice with regular Kroot, don’t expect Kroot hounds to be more than a roadblock for the enemy.

Codex Prediction: Given that these models are no longer available and hard to find, aside from a Kroot blanket stratagem, my prediction is that Kroot Hounds may get a new kit, or at the very least a re-boxing. I could, sadly, also see them dropping this from the codex completely, but that’s a very pessimistic thought. Highway to the DANGER ZONE!

Given the overall increased survivability of vehicles in 8th edition, Piranhas are an interesting choice for T’au lists. Their strength lies in their ability to move fairly quickly, drop off drones to hold objectives or keep out deep strikers, and carry seeker missiles. That, and their most basic loadout and overall cost is pretty cheap.

My recommendation is that if you are going to include Piranhas in your list, include at least 3, and do so as individual squads for an easy Outrider Detachment. Bring seekers if you want them to be a part of your gunline turn 1, and then act as your mobile objective grabbers. While they can carry fusion blasters, odds are the single shot, then single wound roll, and then potential 2 dice damage roll might not always come through for you. Burst cannons with the attached drones are pretty good at landing a decent number of hits and wounds against enemy infantry.

Codex Prediction: While the old Firestream Formation that allowed Piranhas to leave the field and re-arm and repair, no one has formations anymore. However, seeing how certain codex stratagems have imitated “formation-imitation” bonuses, I could see a stratagem allowing for Piranhas to be repaired and/or rearmed. This would make bringing seekers on them even better. “Are you still there?”…wait, wrong game

These helpers of the greater good are once again back as a fast attack option. For 32 pts for 4 gun drones, you can spam a considerable amount of dakka if you fill out your lists with these puppies. However, one of their strengths is the Savior Protocols, which allows for the interception of wounds to the drones instead as a mortal wound. This allows Tactical Drones to be used as ablative wounds easily for infantry and battlesuits, and in addition as separate units can be used to deny targeting to your more important characters. Shield Drones did get relevant again with the ability to shrug off a wound on a 5+. Put an ethereal in that mix for layered 5+ resilience if you have the drones babysitting your Broadsides (or T’aunar if you’re one of those players…)

The one setback I see is that drones get their points back by adding to the number of drops you can have in a Manta (since on deployment they become another unit), and so by buying them as a separate option, it has to be towards a strategy that doesn’t necessarily lean towards Manta striking. Granted, you could still build that way, but it would be more effective in that case to have the drones purchased by your guaranteed ground forces, and have other drones bought as part of the kit of your deepstriking unit (since that’s the only way they’d be able to Manta Strike anyways).

Codex Prediction: Similar to my idea regarding Piranhas, I could see a stratagem affecting drones native ballistic skill, or perhaps some other interesting gimmick (e.g. each drone blows up and enemies within 3” take a mortal wound, or drones can spend a CP to get interceptor.) 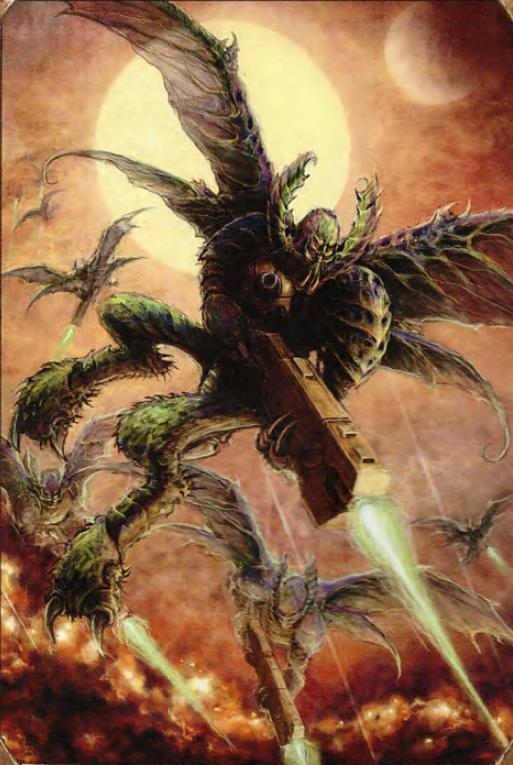 Death by a thousand cicadas

No longer the recipient of “Worst T’au Unit Ever” award (now that’s the Kroot Shaper….gah later on that again…) Vespids are actually a solid choice now, especially for armies that need cheap backfield objective grabbing or board mobility. With a 4+ save, pretty scary guns, and a 14 inch move, 75 points for 4 and a Strain leader is a nice buy. While you can’t expect these guys to carry the same punch as a Crisis team or Commander, they are pretty solid at assisting with taking out stragglers, or again just having some global presence on the board.

Codex Prediction: To be honest, I am not sure what kind of stratagems could apply or affect (or even exist) for Vespids. My guess is that they will benefit from some more global ones, and potentially gain some power from there. Any Sept bonuses that affect alien mercenaries should affect them as well, T’au willing. Stay on target….STAY ON TARGET

You can’t talk about marker lights without thinking about Pathfinders. The go-to Vanguard of the T’au, Pathfinders are the cheapest source of markers for the Empire. That said, they are also the most fragile, so how best to protect them?

Protecting them (or even bringing them) depends on your list concept. If you’re running a static gunline, putting them behind cover to then advance if you go first (or the reverse if you go second) is a solid way to protect them. Additionally, if you have the points, a Tidewall or a Devilfish could also lend itself to your overall list. If you find yourself in a mobile attack list, consider using marker drones instead.

At the end of the day, you shouldn’t plan on them being alive too long. They only need to be alive long enough to get the first sets of critical markers you need, especially if you’re bringing seeker missiles. After that, using drones to get the single marker you need for re-rolls of 1 is all you could need.

Regarding the other weapon options (rail rifles and ion rifles), while I have not tested them as much as I’d like, this could be good a good list addition if you’re using the rifle team build as a component of your gunline. That said, the rifles (especially rail) are very expensive to put on a Pathfinder team that only has a 5+ save, especially when these rifles do not have the Sniper rule.

Only bring their special drones if they will affect other units as well, and even then I’d be hesitant; since the drones become their own unit, they can get picked off easily, and you would have not been able to use those abilities and have lost points during the match.

Codex Prediction: Pathfinders, being so cheap for the markers they give, will be very critical once T’au get their stratagems, as I predict a good number of stratagems or the very powerful ones will be based on whether or not an enemy is marked. In this case, plentiful markers will be much more necessary for T’au lists than currently.

Pathfinders as a unit may benefit from Stratagems allowing them to gain bonus cover, or Sept rules that would benefit them as Infantry.

Now, if you read my some of my earlier articles, you would probably expect the XV109 Y’vahra to be next. And it is!….in my next article! Tune in next week for a change of pace, where I talk about T’au list building in depth, from the core ideas for a T’au list, to the three top lists T’au have access to in the current overall competitive meta.

Hope you enjoyed reading my thoughts on the Fast Attack choices! Feel free to comment about conspiracy theories, my article, or any other thought in the comments here or on the social media application of your choice. I’d love to hear from you! 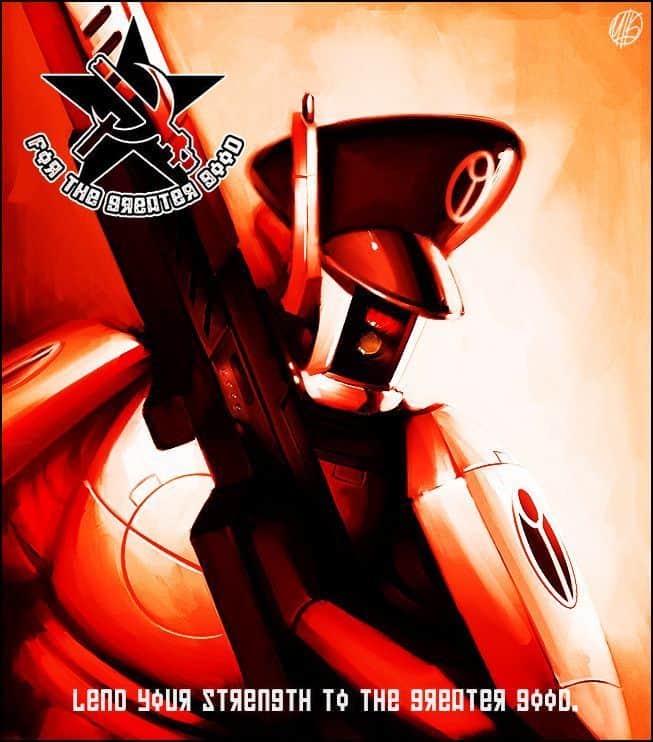