Salty John here with a review! This review is a bit different as it will be a review of a video game rather than my usual wargaming related stuff.

The video game up for review is Total War: Warhammer. It shouldn’t come as a surprise to anyone that video games using the GW IP are some of the most successful and sought after games by both players and developers. I love me some GW based video games. I must have played through Space Marine 5-6 times even with the terrible ending sequence. Dawn of War and all the expansions single handedly wore out the graphics card on my old Dell XPS laptop. My phone has several GW licensed games on it as does my iPad. Freeblade is a great example of a game designed for mobile devices using GW IP that has done really well.

Most of the games developed using GW IP are 40k based. This isn’t surprising given that 40k is far and away the most popular products and IP GW owns. When the makers of Total War looked to GW for IP to use for their next iteration of Total War, they settled on Fantasy Battle. It’s obvious this game began development before Age of Sigmar, and in my opinion, it’s also obvious that GW wasn’t completely set on the whole Age of Sigmar reboot prior to End Times. The game uses all the names, maps, races etc from Warhammer Fantasy Battle rather than Age of Sigmar. The unit designs are also clearly WHFB based rather than AoS. That said this game looked really cool, so I decided to give it a go.

I discovered the game when looking through Twitch one day. I found BurkeBlacks channel, he’s the guy who dresses like a Pirate and everything it pirate themed on his channel, and he was playing Total War: Warhammer. After watching him play as Dwarfs for about an hour, I was sold on needing to try the game. I have been out of the PC gaming world for a few years now. The combination of playing 40k, having children, lacking a real gaming PC, and playing xBox meant I just sort of tuned out of that world. Around the time I discovered BurkeBlacks Twitch channel, I also started watching some Starcraft 2 ESL league play on twitch and decided my next computer would be a gaming capable PC. I ordered an ACER Predator gaming laptop, SC2 and Total War: Warhammer. I immediately went to playing as Empire in TW:WH.

It’s not an easy game!

First of all Total War is a combined turned based/real time strategy game. You organize your kingdoms and armies, tech trees, and world events in a turn based system on a global scale. Battles between armies and sieges are fought in RTS style battles. This is a really cool system!  It was super new back in 1998 when Lords of the Realm 2 really popularized it. I loved that game but never got into the Total War series. I think if you’ve never played the Total War series before now, TW:WH is going to take some getting used to. I clearly was in over my head in my first go around playing Empire and quickly found myself with no money and getting annihilated by my neighbors. Dwarfs are supposed to be the easiest to play, so I tried them next and had much more success. Overall the play experience is awesome, so let’s go through what I think makes this game so much fun.

The setting. You can’t beat GW for their Fantasy and SF settings. Pre Age of Sigmar, Fantasy was a great world to play in and the races all interact with each other in the game in ways that make sense. The world displayed in Total War: Warhammer is lush, vivid, and accurate to the old GW fluff. The world is immersive and it changes based on the faction you play.

Factions. Each race, or faction, in the game is unique and their distinct character comes alive via the game. They all have things in common such as tech trees and build trees but how each race goes about it and how you implement the changes varies greatly. Dwarfs have a ton of tech to discover, and they also research quickly. Orks have a very limited tech tree and research slowly. Chaos are a horde based army, so you don’t control cities or settlements, you don’t trade, and you get money by raiding and destroying your enemies armies and settlements. The way TW:WH goes about making these factions so distinct even extends into the battles and armies themselves. 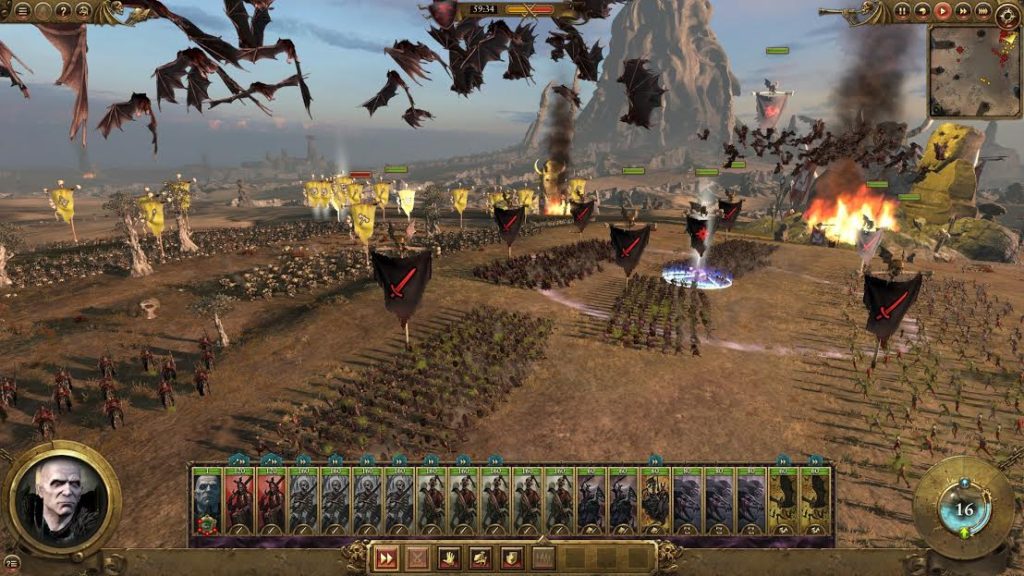 Battles. This game would be really boring without the RTS battles. What makes these battles so great is how the terrain plays a role in the battles. How each army is different from the each other. For example,  Dwarfs have no Cavalry units, but they have great ranged weapons. Orks have huge numbers but low morale. Chaos have amazingly strong units like Chosen, but they’re a hard faction to play.  Vampire Counts have crazy effects on enemy morale and monsters all over the place. Controlling these different units in real time on the battlefields in something all of us who played the tabletop games have always imagined our units on the table doing. This is a huge selling point of all the GW licensed video games: it lets players who love the table top games do what they’ve always dreamed of doing. Total War: Warhammer is an amazing representation of the tabletop battles many of us have come to enjoy.

Longevity and replay value. The game is long. This isn’t bad in my opinion. If I am playing a turn based game I expect to invest several hours into it, and expect to save my progress many times. If you want a game that’s fast to play, then you’re looking for multiplayer RTS games like Dawn of War and StarCraft 2. This isn’t that. It is an immersive but fulfilling experience to play. Replay value on this game is huge. Once you’ve played as Dwarfs and won, you can turn around and play as Empire, Orks, Vampire Counts, then download the Chaos add on, then the Beastmen add on. If they keep adding armies, and there are a lot of them they could add as Elves aren’t even in the game yet, so this game’s longevity and replay value will only increase. 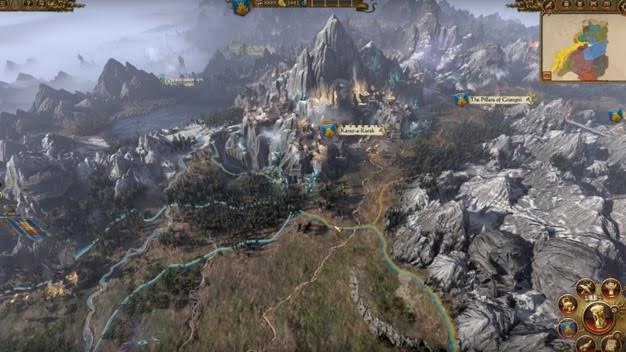 Diplomacy. Many players find the diplomacy aspect of Turn based games like Civilization to be one of the main turn offs. If that’s you, then this isn’t going to be your game either. Diplomacy plays a big role in the game and can make your life a lot easier. If you stay on great terms with allies, you can gain their support through coordinated attacks, vassalage (where they subjugate themselves to you officially), or confederation where they actually join your kingdom and you gain control of all their settlements and armies.

There is a big stumbling block to this game that I alluded to earlier. That stumbling block is entry. If you’ve never played a Total War game before, you’ll be at a distinct disadvantage and have a fairly steep learning curve. The game will seem very complex and difficult to learn. Even with the tutorial messages turned on for the first several game turns, and the clickable type so you can see what the game means by certain words, it is confusing. I can only figure that the designers of the game assumed players had a baseline knowledge of the Total War mechanics when designing the game. Even as an experienced PC gamer, I found the game very frustrating on the first two attempts to play because there were times where even with the in game help I simply didn’t understand what I was supposed to do.

The only other drawback is late game needless complexity. When you start off, the game presents you with special quests, or missions, and they include things like raising a certain amount of money, defeating a specific enemy general, raiding or sacking a certain number of territories etc. In the early game, pre turn 75 or so, the quests are easy to track and stay on top of. Mid to late game turn 75+ or 120+, the quests come on rapidly and become difficult to track and accomplish in a timely manner. Managing all the different settlements and armies also becomes difficult, and you’ll find yourself choosing to auto-resolve battles more and more often as you’re pressed to micro manage all the global details. It definitely makes you lose the drive to fight all those battles yourself. To me that is a real shame because the battles are some of the most entertaining and immersive features of this game. 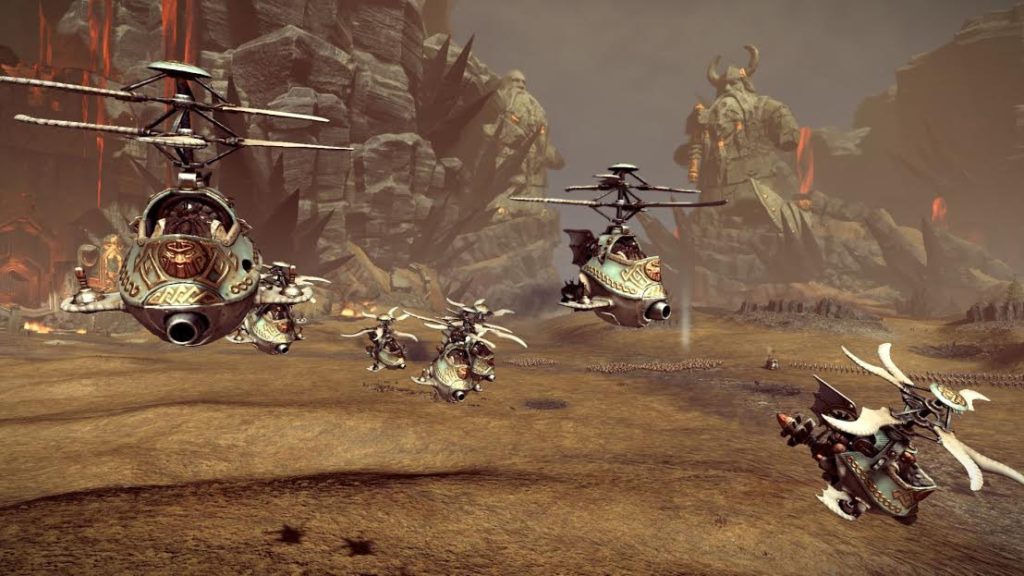 If you’re looking for an immersive game that combines turn based strategy games and real time strategy games set in an amazing world with huge potential for expansion though DLC, then this game is for you! If you’ve ever wanted to raise and lead huge armies from the Warhammer Fantasy universe in a massive war of conquest, then this game is for you. I can’t recommend this game more highly for fans of either the Total War series or Warhammer. Chances are if you’re a fan of either of those, you’ll love this game too. If you’re new to either, it may not be so appealing. 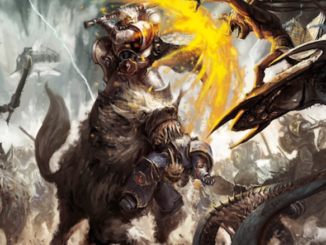