I no longer keep count. The enemies that have fallen to my bolter and chain sword occupy very little space in my thoughts anymore. All that I seem to see when I close my eyes is the Traitor standing over my bloody body.

I feel the pain of my Primarch, Sanguinius, more and more each time I slip into my visions. Brother Chaplin Democrates says it isn’t my time to dawn the black armor of the Company, but I feel….less… every day. All that matters right now, all I need to do right now to ease this pain is spill this ork’s blood. My bolter ceases to fire, but as I prepare to slam in the next magazine I notice that my left arm is gone below the elbow. It makes no difference. “Alright Brick go ahead.” I’ll have to end this up close… “Brick, dude…”.I gather the strength in my legs, ready to close the last bit of distance… “Brick, are you going to roll your feel no pain now or just stand there staring off in space?!?!” “Oh uh yeah, yeah. I need a 5+, so here goes.” *rolls a one* “Dang, Brick. Guess that is a failed charge. I really got lucky on those overwatch shots.” 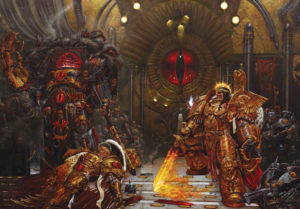 My name I Brick Johnson. I have been playing table top games on and off for about 15 years now. I live in the greatest state in the union, and if you aren’t sure which the greatest state in the union is, well then you probably don’t live in it. Recently, I have gotten back into the game with my first love, the almighty Blood Angels. That is right. Those pesky emo kids listening to My Chemical Romance and smoking in the bathroom at Space Marines High School. (TFG Radio Episode 45) 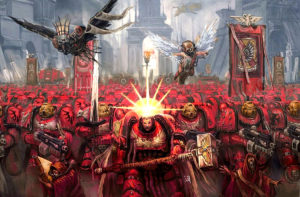 I first heard about WH 40k at my local gaming store where I played card games. I don’t want brag, but I was once a talented Dragonball Z TCG gamer *takes a bow* I would hear these guys making all kinds of noise in the back of this huge comic bookstore. “Blood for the blood God!” or a mighty “WAAAAAGGGHHHH!!!!” would echo in the store. One day I finally went in the back to see what brought about all this excitement. I think I was about 15 maybe, and I saw a bunch of grown men playing with the most badass toy soldiers I had ever seen. The mighty Blood Angels! I loved everything about them. Being a 15 year old boy with all this angst and emotion, I identified with these guys. The owner of the store told me all about them, and when I heard about their most elite unit, the Death Company, I was hooked. Little note here, but this was when the Death Company was actually good too. Think slightly less powerful Wulfen, but they were *insert air quotes* free as far as point cost.

After all that intro, I arrive at the reason I am even writing this. Why play Warhammer 40,000 (WH40k)? Why play table top games in general? Personally, I love the community and interaction that goes along with the hobby. I think the piece Danny wrote, “The Golden Age or the Withering”, sums up a few of the benefits to this hobby greatly. Aside from getting actual human contact and getting to tell your opponent how rekt he got to his face rather than over a mic on your PS4 this hobby has something in which different types of people can find and express their talents. I believe there are basically three parts to WH40K, or any table top game really.

Modeling is the first part. I love Games Workshop model, and no I do not nor have I ever worked for GW. I think they have some of the best looking models of any game except for the Wulfen, like srsly dude, bro? I love being able to assemble and customize the models. If you like building things and working with tools, this is a great hobby. You don’t even have to limit yourself to the models. I have seen amazing display boards and custom gaming tables. In a game where you assemble your army, the possibilities are endless. 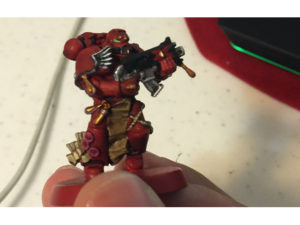 Painting is the second part. Personally, this is the part in which I struggle. I don’t find it boring or anything, but I am just not very good. I build all these sweet looking bros, and then I ruin them with my awful skills. However, there is this thing called the internet. I’m not sure how it works, but I’m pretty sure it’s magic. That or just a bunch of tubes with hamsters running around inside, but there are plenty of tutorials and videos to get you started.

This is the product of a ten minute video I found on YouTube, and is it going to win an award? Probably not an award to be proud of, maybe like best effort. It is ready for the table top though. I also felt very accomplished. Painting is what got my girlfriend into the game. I know what you’re thinking, “OMG girls think this is cool?!?!”  To which I would reply, “Only the girls worth keeping around ; D”

Lastly, and what I find most exciting is the gaming part. There are so many ways to play this game. For me, I am more of a casual player. I enjoy playing a fun game at my local gaming store, or going over to my friend’s for some drinks and an afternoon of my drop pods getting shot out of the sky by friggin’ Tau Riptides and their friggin’ skyfire interceptor shenanigans. If you are in to thematic stories rich with suspense, you can play in a campaign. Create your own character and level him or her up as the campaign continues. If you want to get down and dirty, you can play competitively. Try to put together the best list *cough Eldar cough* you can think of and go toe to toe with the best armies * cough Eldar cough* in your hometown or at a major event across the U.S.

This hobby is so diverse, and really has something for everyone. It is very tangible in the sense of completing a project. I have found that seeing something from unboxing all the way through painting is very rewarding, and that is only the beginning. You then get to go melt some faces on the battlefield. So whether you’re like me and love the models and rolling some dice, or you like the challenge of bringing these models to life with intricate paint schemes, I suggest at the very least you go by your local game store and talk to someone. Find out when there is a game night and stop in to watch all the excitement that goes on during the games. The Emperor needs you….. 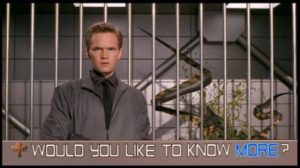