Today’s article is a recap of our local two-day annual Hammer of Wrath tournament! Sorry in advance for the photos. I hope I have a knack for writing, but I definitely am not a photographer. But hey, practice makes not perfect but better than crappy.

3 Commanders; one with 3 missile pods and 2 shield drones, 2 with 3 Cyclic Ion Blasters and 2 Marker drones each, and every commander had ATS

3 Hammerheads (Love/Hate relationship, more on that later!), plus Longstrike, all equipped with Railguns, SMS, and 2 seeker missiles each.

3 Piranhas with burst cannons and 2 seekers each

3 squads of 10 Kroot, and 2 teams of 6 Pathfinders, and 3 Crisis Bodyguards who only had Stim Injectors

The aim of the list was to setup a firebase around the Missile Commander using the hammerheads, at least 1 Pathfinder squad, and the Piranhas if there was room. The Kroot acted as an assault and deep strike screen. Then, I would use Kauyon if I went first and seeker missile an enemy threat into dust, or setup defensively and Mont’ka into  a better firing range. 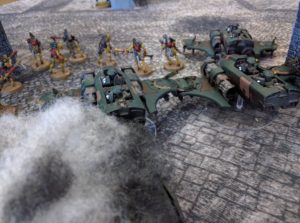 I loved using these little guys

First game was a Dawn of War deployment against a Space Wolves army. The guy was super nice, and designed his army to be different characters from various characters from the Nintendo universe. Unfortunately for him I was able to seize first turn. His list had Thunderwolf cavalry, LongFangs, Blood Claws, and Land Speeders, as well as other various supporting elements. I had deployed so I wouldn’t be worried about going second; the cavalry wouldn’t get past my Kroot (I had them advance far enough to act as a speed bump) and was only worried about losing one, at worst two hammerheads to the LongFangs. Going first though, I had positioned myself to have line of sight to most of his threats. Using the seekers the cavalry were shot down completely, the SMS killed the Longfangs (he deployed his LongFangs close to the edge of the Dawn of War Deployment) and my two Cyclic Commanders came down and did some work to the speeder squadron. He couldn’t hit me back hard enough on his turn, and conceded bottom of three. 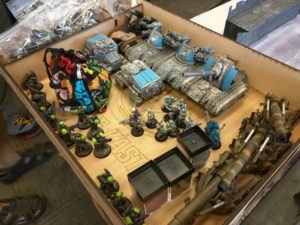 Not pictured: Yarrick and 60+ Conscripts

Second game was against an IG list that had earthshakers, wyverns, conscripts, tauroxes, scions, and a Primaris detachment of 2 standard Primaris Intercessor squads, and a captain who sat next to standard SM lascannon devastators.

This game was brutal, and against a very tough opponent from the team “Relentless D.” In this scenario, the Relic, his conscript screen kept my commanders from getting close to the meat of his list, and the sheer number of targets to chew through wrecked havoc on my targeting priority (and missing some key shots with my hammerheads). I couldn’t shoot him off the relic, and his earthshakers eventually took their toll. 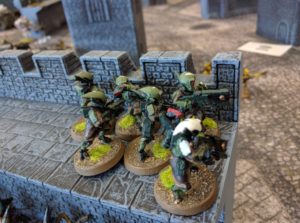 I played against another T’au player who arguably is one of the nicest people I’ve ever met. We’ve played several times at local tournaments, and its always been a back and forth of who takes it, and always pleasant. He ran two Ghostkheels, 6 squads of 5 firewarriors, 1 hammerhead, one missile commander, a crisis team with double plasmas, Farsight (I was so happy to see a Farsight), and two one man broadside teams. He also had 3 pathfinder teams, one with 2 rail rifles.

This game was close; I made several key errors in where to focus my firepower and deepstrikes, but ended up taking the game (No Mercy; it was Kill Power Level). His composition surprised me in how effective it was, but once the Pathfinders closest to my tank gun line were gone, his Ghostkheels dropped in effectiveness, and the firewarriors weren’t able to damage my tanks enough (though they did do work on the piranhas.) Also worth noting is that his Broadsides, while I did kill 1 of the 2, were annoyingly difficult to uproot. While they are more expensive then hammerheads in some ways, 2+ up armor in 50% cover ain’t nothing to sneeze at. 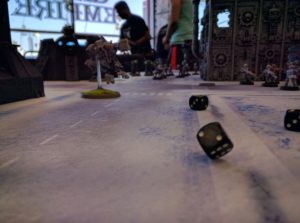 This is not an action shot; the die actually stopped on its edge O.o

My opponent here was a friend of mine, and someone who also follows T’au having played them a lot in 7th edition. Here he had Pask, 4 squads of Ratlings, Broodlord and Patriarch with three squads of acolytes, then Old One Eye, the Swarmlord, a Malanthrope, and 5 squads of 4 Biovores.

This game was gonna be brutal either way, but here I completely lost the game before a single shot was fired. My deployment and objective placement was awful. I actually had a chance to bait him into deploying on the farthest end of the table, away from my gunline, giving me plenty of breathing room, but instead, I was too overconfident in my hammerheads’ SMS weapons, and also had forgotten how biovores shoot, and that they were infantry and benefiting from the Malanthrope really wore me for worse. They don’t need line of sight and deploy spore mines which count as units when they miss, which gave him a screen for his GSC. Further, the sheer number of mortal wounds he dealt per turn was essentially 1 1/2 hammerheads. I was able to go first here, and while I killed the Swarmlord first turn, in the end I got bombarded to death and missed a kill opportunity on the broodlord (partially due to the proximity of the Spore mines.) 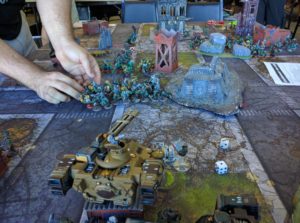 This was top of 3; before this there were about 90 more boyz and a Squiggoth

This was a fun game. It was the altered Hammer and Anvil deployment, but man oh man was there tons of boys, and some weirdboys…and some grot gunz…and a huge squiggoth. The game was him throwing boyz at me with DA JUMP and using Rokkit Boyz. In true T’au style, I just sat back and shot and shot and shot. In the end, while my shooting dice were hot enough, it was my Maelstrom dice that betrayed me. We did the math/logical follow up and found out that I would have taken the game on turn 6 or 7 (we fake rolled for both). However, tournaments don’t always allow for the necessary number of turns, and I lost on five due to time. It was a very fun game nonetheless, and the guy I played was a fun guy (hehehehe get it because orks are fungus? I’ll see myself out…)

I had a solid list that handled other, smaller elite lists and lower model count gun lines well, and even did well against horde types. However, I lost because of a couple reasons

I did have a ton of fun though and learned a lot, and no matter how competitive get or want to be, those are the most important parts of being a student and player of the game.

But now an announcement!  Next week is the first of my T’au Role Reviews: the HQ Section! Having now talked about the game enough, and using this article as a sort of “Playing against the opponent” piece of sorts, I’m going to start going more in depth about the units by role (HQ, Troop, Elite, ETC).

I’ll be sure to dedicate enough thought about each unit. But a key thing about to note about my review style is the following:

That’s all for now, gang. Hope you enjoyed these (very) short form summaries. If you have any additional comments or questions about my list or others I faced, want to say nice or mean things to me, or want to have a general argument about pretty much anything, feel free to post in the comments either here or your local Facebook link page! I hope to see you with your theory-hammer slippers and pipes next week!

Oh Farsight? Probably the most underrated HQ, and insanely powerful. You’ll find out more next week… 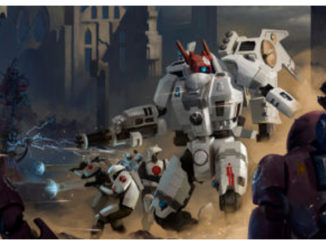