Hello everyone, Danny here to go over one of my favorite Power Armor armies that doesn’t get too much love but still has some surprises despite that the halcyon days of 5th edition are long gone, the Grey Knights! 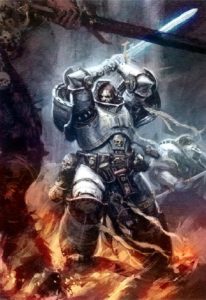 The Formation: The Grey Knights Brotherhood

Psychic Brotherhood: As long as Grand Master is alive, all units harness Warp Charge on 3+

Rites of Teleportation: You can roll for reserves turn 1 and any unit arriving from Deep Strike can run and shoot in any order on the turn they arrive.

Ok, so this is a lot of stuff, and it is definitely one of the largest formations out there as it is essentially an entire army laid out for you, but there are a few key things.  Brotherhood Commander is whatever, but Psychic Brotherhood means that the sheer amount of Warp Charge you pump out is even more efficient, and Rites of Teleportation gives you a full null-deploy army that can actually be devastating on the drop.

So this my whole army?

Yes, but that’s not a bad thing really.  You get a lot of kill in this formation, and you get to make use of the Grey Knights’ psychic shenanigans early on and with some real pop. First, this army pumps out the Warp Charge.  With everything on the table, this is 15 Warp Charge, and as long as the Grand Master is alive, that’s 15 Warp Charge that harness on a 3+.   That’s not too shabby at all.  Add in the Grey Knight inherent buffs of rerolling 1s to Deny the Witch, and you have some strong psychic defense and the ability to dominate the phase against most other armies.

Let’s also not forget that the Grey Knights can shoot.  Purgation Squads can each bring up to 4 Psycannons, and the basic Strike Squads can also bring one per five.  The Dreadknight can get a heavy psycannon, and even the most basic of bros packs a storm bolter.  With this much shooting, especially on Turn 1 with most of it deepstriking, you are going to absolutely shred a lot of armies.  With their own psychic defense, you can also challenge a Deathstar pretty well if you get first.  You can land and pump out so many shots before the Star charges up that you can cripple one pretty well before the fight really begins.  If you manage to get Vortex of Doom, you can reliably cast it with a 3+ Warp Charge harness, so you can start dropping D-vortexes right into the middle of a Deathstar on turn 1.  For this reason, it makes sense to give the Liber Daemonica to the Grand Master to give him an extra roll on Santic for it as well as a reroll to casting. 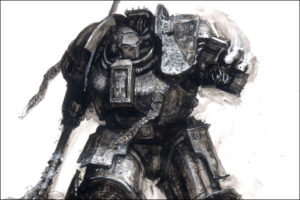 Let’s not forget that thanks to Hammerhand and nemesis force weapons, each GK is a pretty solid fighter, so this army isn’t a slouch in melee.  You throw out a lot of AP3 and it is easy to get S6, and S8 (or 10) isn’t too hard to reach.  So again, against a psychic deathstar, after your initial land and hit, they may struggle to take out units as you hit pretty hard, so while they can chomp on some, they are going to keep bleeding as it happens.

So really, you get an army that is good at just about every phase of the game except for movement (outside of the first).  That’s pretty legit.

This seems really good. Why isn’t it more common?

Well, the first and biggest issue is that it is so expensive that you cannot see it at anything less than 2K points.  That’s right, raw and naked, it costs 1920 points, and really, for it to be truly effective, you are looking at 2250 to really be able to do damage.  Yep, so this is a formation that will not see play outside of large games, and so if you are interested in more tournament style games, you can’t use this formation. 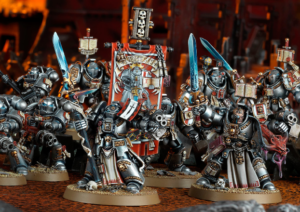 The other issue is that it completely lacks Objective Secured, despite bringing 6 different troops, and well, that means that while you may have bodies, you won’t be able to hold any objectives against the standard Obsec spam of Battle Company, Daemons, or even Eldar.  This formation has a wide selection of units, but again, without Obsec, it is going to struggle to control the mission.

The other issue is that it is slow.  Except for the Dreadknight and Interceptor squads, everything here walks, so while you get to drop in and kick some ass, once you are there, you are there.  As Travis has so wonderfully explained so many times, once Marines deepstrike in, they aren’t going anywhere else really.  If you get Gate of Infinity, this gives you some moves, but still, you are mostly stuck in place once you land.

Lastly, the Purgation squads lack deep strike (the only thing here that does), and they offer the most heat, so chances are they are just going to sit in the backfield or hide in Rhinos. Too bad.

So yah, this formation is really a ready built army, but unfortunately, it is really only meant for games at least 2250 in size if not best at 2500.   If you and your pals want to play a mega-battle, this is a great, fluffy way to capture the Grey Knights and how they would work on the battlefield though.  As always, thanks for reading, and of course, check out that Patreon.