Hey all, Danny here again with this week’s latest article on Formations, and this week, we will be focusing on a formation that can be fun, almost fluffy, but also surprisingly effective on the tabletop: The Infernal Tetrad! 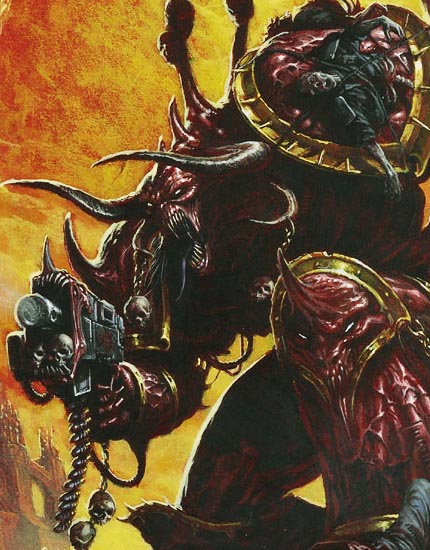 Combined Might: Based on the numbers of daemon princes alive, they gain the following bonuses, which are cumulative: All 4 princes, +1 toughness. 3 princes: +1 strength.  2 princes: reroll all 1s to Hit (melee/shooting).  1 prince: nothing.

Shared Power: If one of the Princes is your warlord, the other Princes share its warlord trait.  It is important to note that as of the GW FAQ, this does not stack, meaning that you cannot get +4 to seize the initiative or anything like that, but it is a nice feature if you roll +1 mastery level or any other solid buff for the model rather than reserve manipulation or something like that.

Well, first off, this formation essentially gives you the ingredients to make a crazy, pan-deistic flying circus of awesomeness.  A Daemon Prince is no push over, and with all the cool gifts and powers available from Curse of the Wulfen, you have a lot of variety and flexibility here.  Yes, this formation is expensive, but it certainly gives you a great deal of agility in the list-building phase as you can go crazy in a lot of different directions.

If you want to be as competitive (read as donkey-punching) as possible, 3 of your 4 DPs can be upgraded to be powerhouse pyskers, so you get 3 level 3 psykers. That’s a lot of dice generation already, especially since they can be on a flying monstrous creature chassis, which is relatively survivable, especially with toughness 6 from the formation bonus.  If you couple this with a daemon CAD full of pink horrors and heralds, suddenly you have a pretty massive psychic battery.  Not too shabby at all.  Just playing around with lists, I could manage 14 starting psychic dice and a screamer-star at 1850.  That’s just after a few moments of playing around and with no real fine tuning.

On the FMC chassis, you have 4 models that 90% of others hit on 6s, T6 with a 3+ armor save, jink, and 5++ invulnerable saves.  The Tzeentch DP has a reroll for 1s on Invul saves, and the Nurgle DP gets a 2+ jink save.  That is pretty survivable.  So long as you are staying swooping in the air and not on the ground, these 4 DPs are hard to take down and require a considerable amount of attention, which your enemy might not be able to spare.  It is not a bad way to keep a good chunk of your army safe from the enemy, and with the bonus +1 strength as per the formation, str 7 vector strikes threaten a lot of other flyers/FMCs.  As a funny combo, with the nurgling of -1 Toughness on the Nurgle DP, you can instagib T4 characters with vector strike if your placement is on point.

You can also catch people off guard and go a bit melee oriented.  This is the cheaper route, and it overwhelms your opponent with 4 mean MCs that are WS 9, str 7*, T 6*, I8, and with five attacks base (*with bonuses from formation). That’s not shabby, not to mention the inherent bonuses of the marks and equipment like the Armor of Scorn for Khorne (-1 strength to shooting attacks against it), or the 3++ invul save (but fail and die) for the Tzeentch DP.  You can go cheap and just deep strike them into the field rather than use wings, and if you can get some reserve manipulation, you can have 4 killing machines pop down in the middle of your opponent’s army in the same turn.  Back that up with some waves of plague drones, flesh hounds, or even Soulgrinders, and you have a wonky melee list that may not be top-table, but will be a hoot to play and still surprisingly powerful.

You can also split the middle, having two DPs be cheap (like Khorne/Slaanesh) while investing heavily in two others.  This gives you some disposable, pressure-applying DPs to throw at the enemy recklessly while having some powerhouse MCs flying around and causing trouble.

Lastly, this formation just gives you a great chance to build a thematic, Chaos Undivided list that uses units from all four of the gods rather than just the pink horror/drone/screamer/khornedog spam you may see at the highly competitive level.  This formation is just fun at the end of the day, and while it can be tuned for some serious pain (namely psychic shenanigans), it can also be used to create some really characterful, interesting armies.

So, what do I do against it?

Well, while this list can pump out the hate, it is also vulnerable to the fact that it is so expensive for only 4 models.  The most bare-boned, stripped down version of this formation costs 645 points for 4 marked princes with NO upgrades, so no wings, no armor, no gifts, and no psychic levels.  At its most powerful, you can expect this formation to take up about 1200 points.  That’s a lot of points spent in just 4 models that can still die to Instant Death attacks, and the power of the formation degrades as it suffers casualties, so if just one prince dies, all of a sudden, those DPs have to be wary of strength 10. The Tetrad brings some tough hombres to the fight, but once one goes down, they are all in trouble, and just bringing those 4 bad dudes means that there won’t be a lot of other threats in the army.

Another huge issue here is that the Khorne DP needs to be on the ground and fighting to be effective, but that is also where it is most vulnerable, so you are either letting the Khorne DP derp around and maybe vector-striking something, or you are sending it off to fight and hopefully not die.  Either way, you are at serious risk of losing a 200 point (or more) model for nothing or next to nothing, and again, once one goes down, the others have to start being much more cautious.

Because the formation is so spendy, a mass Objective Secured force can really frustrate an army with this formation at its core as it will struggle to kill them all, and as 1200 points or so are flying and thus not capturing objectives, the obsec units can stroll in and win via the mission.  This also leads nicely into a related issue: these 1200 points are not necessarily killing swathes of the enemy.  Witchfire powers are notoriously unreliable, and while each DP is a monster in close combat, they are also far more vulnerable there rather than jinky around in the sky.  The DPs are best as summoning batteries, but that means they are not actively fighting and doing damage.  A canny player can (and should) ignore them to kill their support and any summoned units then dominate the mission, making them land and probably dying as a result.  If the DPs are summoning, they aren’t casting witchfires, which means they aren’t doing damage. If they are on the ground and fighting, they are much easier to kill.  This is the paradox of the Tetrad: 4 badass MCs, little actual killing power in most cases without serious risk. 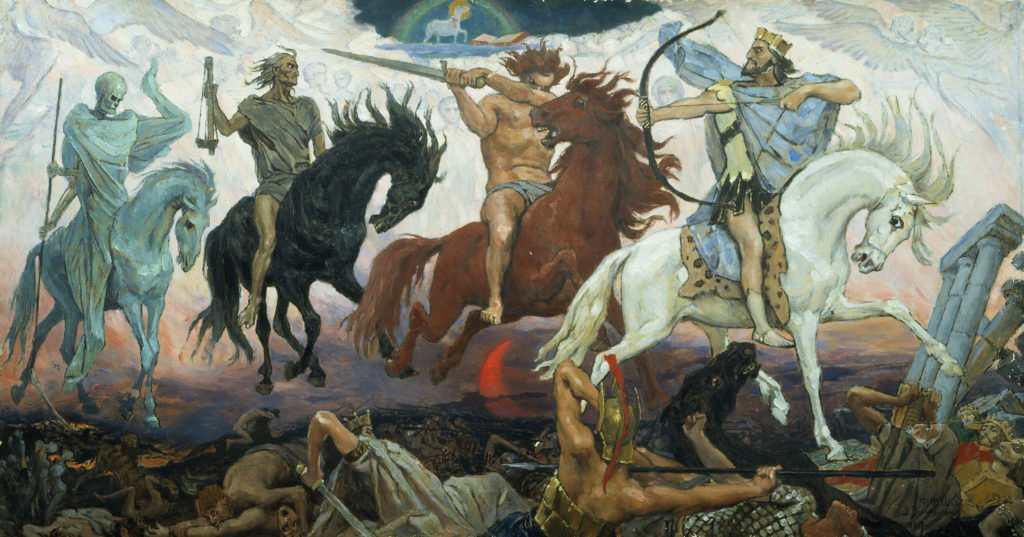 So there you go, Tetrad is a fun formation that can either be the start to a fun, Chaos Undivided force, or it can be the engine of a daemon-summoning nightmare!

Of course, TFG Radio is its own Infernal Tetrad (plus our requisite Blood Thirster), so why not help us out and check out our Patreon page!