Hello everyone, Danny here to go over a new detachment and faction for 40K, the Custodes! Yes, a bit different for a Wednesday, but the times they are a changin. 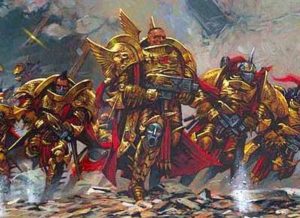 Restriction: All units in this Detachment must have the Adeptus Custodes Faction.

The Emperor’s Chosen: If this Detachment has the maximum number of units, all units in this detachment reroll invulnerable saves of 1 when within 6 inches of another unit with the Custodes faction.

From the Golden Light They Come: When Deepstriking, units from this formation only scatter 1D6 and reroll on the mishap table.

So the special rules here are pretty good, namely 1D6 Scatter gives the Custodes some pretty reliable placement with DS and really keeps any mishaps from crippling a unit (which is good since they are not cheap).   Being able to reroll invul saves of 1 is huge, and while pricey to do so, you get a lot more durability out of these gents, particularly if you give them a storm shield. 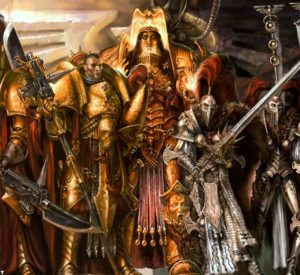 Ok, so that doesn’t seem bad.

Oh, it’s not. Custodes are pretty mean troopers, especially with the new upgraded rules in their tiny little codex. They all have Eternal Warrior now and a 5++ invul standard, which definitely helps them last longer.  In terms of their raw stats, they are essentially a +1 to your standard Space Marine stat-line, so they are WS/BS 5, S/T 5, 2W, I4, 3A, Ld 10, and with a 2+ save standard.  That’s pretty beefy.

Once you factor in their gear, they get scarier as standard they bring a Guardian Spear which makes them S6 AP2 in melee and have the chance to negate one enemy attack in melee each.  This can be super clutch when going against a single model with a few very high quality attacks like a D-Thirster. You can also give any a storm shield and Sentinel Blade for a 3++ and a S5 AP3 melee weapon that also overwatches at BS2.  3++ rerolling ones is a 77% chance of saving any wound, so it takes 4 wounds to punch through that storm shield on average dice. Not bad at all, especially for an EW 2W model. You need to land 8 AP2 wounds to kill a single Custode in this configuration.  Finally, you can give one model a standard per unit, which grants a 12 inch bubble of Fearless to Armies of the Imperium and +1 attack to the unit. The standard bearer still gets to swing in with S5 AP3 thanks to the standard Power Knife.

They can hitch a ride in a special Land Raider that has a 5++, Venerable rule (reroll results on a penetrating hit) and ignore Crew Shaken/Stunned. This is a better Land Raider, but LoL, still a Land Raider, so maybe in 8th edition? 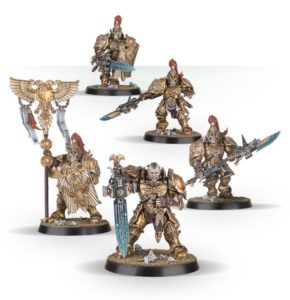 If you want reroll goodness, you have to take the new Venerable Contemptor Dreadnought, which isn’t too bad actually.  It has Deep Strike native, so no need for a Drop Pod, and it has the standard 5++.  It is also Fleet cause why not? At BS5, the Kheres pattern assault cannon is awesome for 6 S6 AP4 rending shots, so getting 5 hits on average dice.  This dude will shred a light vehicle and let the Custodes feast on the juicy goodness inside.

Let’s not forget that as Armies of the Imperium, you can start slotting in other Independent characters to make a bit of your own Deathstar although with only 750 points to go in standard format, that’s not a ton, and without a lot room for other units.  You can also just take one or two squads, and while you lose the reroll 1, you still get a lot of beat stick. 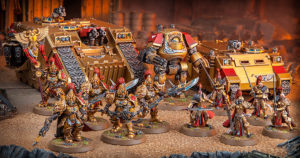 Ok, that doesn’t seem so bad at all. Maybe even good?

Well, let’s not get ahead of ourselves. These dudes are mas macho, but they pay for it.  A unit of 5 costs 260 points, and that’s with no upgrades, so if you want to roll deep with the full reroll 1s trick, you have to spend a full 980 points to get it, and that’s without storm shields.  All told, you are looking at spending about 1100 points to run this optimized, and that’s for 16 models.  That’s a lot of eggs in one basket type of scenario, especially for no Obsec and no psychic powers. 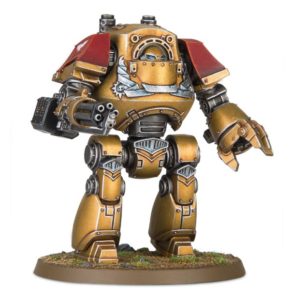 While a unit of 5 custodes are mean as hell, they won’t beat up a Deathstar on their own since they can’t negate the psychic powers nor do they negate Feel No Pain and all the other layered defenses that good Deathstars have.  While a 3++ rerolling 1s is super good, for 1100 points, a standard Deathstar is going to murderize these guys. Even if you go full bore and add in a Librarius Conclave and two, you simply don’t have enough models on the table to play the scenario, so even other Deathstars will be able to just win on the mission.

This is really the biggest issue, you need these guys to do work, but they are a bit slow once they land, and they can’t impact the board that much unless in melee, and again, faster armies will just run around them once they drop in.

So there’s your new faction for 40K (well, one of two), and as always, thanks for reading, and please let me know if you have anything you want to see up here. And yah, go to the Patreon, or Adam will beat me. 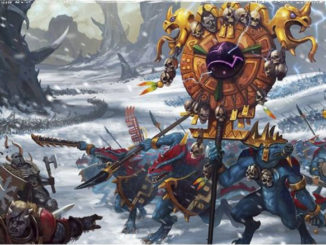