Hey all, Danny here, and this time, I don’t have a formation to go over but rather some random musings about judging LVO for a second time.  I am sure Travis and Adam will go even more in depth in the next episode, but here are some random thoughts: 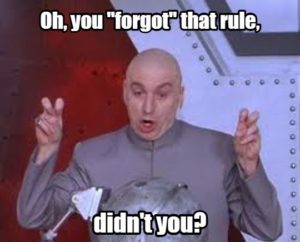 A judge exists to facilitate communication.

The purpose of a judge is to help players talk to each other in a manner that quickly resolves issues in the best way possible, namely in accordance with the rules and in an unbiased manner.  Judging an event with almost 400 players is daunting, and there were a lot of judge calls, but most of them were players who simply could not effectively communicate what each was attempting to do.  In one game, the players weren’t actually disagreeing with a rule application, they just could not communicate this to each other.    What does this mean? Quite simply, try to remember that when you think there is a rule dispute, talk to your opponent first and try to see what they are saying.  You’d be surprised how many times you both agree.  Remember: the person across from you is your opponent in the game, but they are not your enemy.

A judge is not a walking rulebook.

I think any judge can attest to how many times you are called over to answer a rules question that is really just a manner of looking up the rule.  I cannot count how many times I had to essentially answer a question by pointing out the relevant language in their rule book.   Before calling a judge, read the whole rule in question aloud to you and your opponent.  That will solve most things right there.  Judges are not there to answer questions that you could easily look up.  While Travis, Adam, John, and I all have a solid understanding of the rules for most codexes, there is too much for one person to feasibly retain.  To put it another way, there are conservatively 500 unique rules (assume 50 source books from codexes to expansions to FW and then low-ball assume there are 10 unique rules per source), and that is not including the actual rules from the BRB, so please don’t just expect a judge to instantly know how your army works.  Also, please have your rules with you.  I am not walking around with 40+ books in my bag, so if you don’t have your rules, my first instinct is to rule against you as it is your responsibility to have access to your materials.   Really, it should be a forfeit if you don’t have your rules. 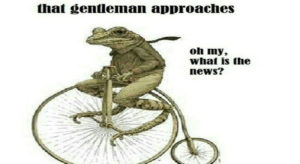 A judge cannot see the past.

When there are disputes between players, a judge is there to mediate it and provide a neutral ground.  Sometimes ambiguities exist, and so there needs to be a third party able to effectively arbitrate the situation.  This is fine. The problem here is that too many times, judges are called when the situation is over.  Judges cannot say who slow-played and who didn’t when the round is over.  If you think your opponent is taking too long, say something.  If you are worried that your opponent is going to ignore a hard dice-down call, call for a judge to watch the end of the game or even just ask a spectator to watch and witness.  A judge can’t come to a table and be able to magically tell which models were moved within the last few minutes and which weren’t.  Did a count-as or proxy confuse you and this messed with your target priority? Call a judge over then and there; do not wait until after all is said and done and expect any kind of reversal.  Don’t expect judges to just know who is right and wrong, and don’t assume because you called the judge over that they will assume you are in the right.   For the love of god, remember that calling a judge is your right as a player, so feel free to exercise it, but don’t think for a second that a judge is able to see into the past.

Calling a judge is not an insult:

Too many times, in tandem with the above, players don’t call judges.  When you call a judge, you aren’t ratting out your opponent or causing conflict; in fact, you are taking active steps to avoid conflict by having a mediator present.  If you don’t like how your opponent rolls dice, call the judge.  If you don’t like the proxies or count-as in an army, call the judge.  If you don’t agree with a rule application, call the judge.  This does not mean you are attacking the other person but rather asking for neutral clarification to ensure the game proceeds smoothly.  On the other side, if your opponent calls a judge, don’t assume they are being a jerk.  Every player has the right to seek clarification from a judge, so do not begrudge another player their right.  It is not sportsmanlike at all to get pissy over the fact that your opponent wanted clarification.    Again, a judge is not a punishment or threat; a judge is there to help you both play the game and play it enjoyably.  If you assume that a judge coming over means someone is in trouble, then you are just creating more conflict when there does not need to be any.   If you get all kinds of salty because a judge is at your table, maybe then you should ask yourself if you are intentionally doing something that a judge may take issue with.

It has to be said: this is a game.  It is a great game. It is a fun game. It is a deep, rewarding experience, but please don’t forget that it is a game with no real money on the line (unless you are actually in the running for ITC champion).   It is a game, so treat your opponent with respect.  Remember: you are rarely blameless.  Your actions and responses can have an impact on how a situation unfolds, so even if you are in the right, be empathetic to your opponent and try to consider how your reactions will impact them.   Getting dirt in your hair over every little thing only makes the game worse for everyone involved. Be considerate, and really, be an adult.  I don’t know how many childish arguments that I had to mediate over the weekend, and if you can’t play this game without getting hot under the collar, stop playing. Find something more soothing, and in all honesty, find out why you get so upset over a game.

Ok, so just some random musings, and don’t worry, next week I’ll just go back to looking at random formations, probably something out of the new Gathering Storm II book.  You can also say thanks for judging LVO guys by hitting up that Patreon.