Hey everybody, Danny here with your usual Wednesday dose of formations as we wait for 8th edition with baited breath.  Today, we look at one of my favorite formations that finally makes a venerable unit viable!

The Formation: The First Curse

The unit of Purestrains must be 20 strong.

Strange Mutations: Before the start of the game, roll on a chart and get a benefit for the Purestrains for the whole game: Assault grenades, 4+ armor save, Poison (4+), Rage, Preferred Enemy, or your choice of the previous.

Ok, so a big unit of 20 Genestealers is not an idle threat, and well, being able to get a secondary perk is super helpful.  All five of these abilities are situational-solid although there is one that you absolutely want 99/100 times.  You also get a bonus Patriarch, which is not a bad thing as even at dirt cheap and un-upgraded, a Patriarch is a relatively punchy character that is also a pysker. 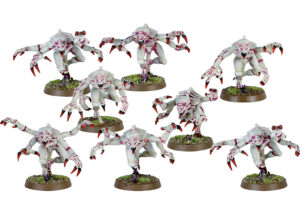 Well, Tyranid Genestealers certainly are, but these aren’t Tyranid Genestealers, these are Genestealer Cult Purestrain Genestealers.  What’s the difference? Well, they do cost the same.  They also have the same baseline stats of WS6, I6, S/T 4, LD10, 5+ save with Fleet/Rending/Infiltrate/Move Through Cover.  So yah, mostly the same.  Oh wait, GSC Stealers also have 3 attacks base, not 2, have Stealth base (+1 cover save), have Cult Ambush and Return to the Shadows, and wait for it, a 5++ invulnerable save.  So yah, GSC Genestealers are actually ballers at 14 points a model.  They are resilient, hard hitting, and because of Cult Ambush/Return to the Shadows, they are tricksy little buggers.

So yes, 20 Purestrain Genestealers is a nightmare.  Without any upgrades, on the charge, they pump out 80 attacks at WS6, I6, that Rend.  They hit before just about everyone, they hit most everything on 3s, and with Rending, they can kill just about anything. Now, throw in that they have a lot of movement tricks thanks to GSC and a 5++ save in an army that lacks any real saves, and suddenly, you have one of the most resilient units in the GSC arsenal.  Coupled with Biomancy from say a Patriarch, and you have a respectably tough unit. 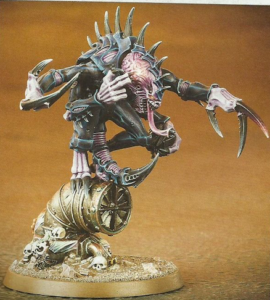 Now, you throw in Patriarch into this and they have Furious Charge, and since the Patriarch can roll on Telepathy, you could possibly get Invisibility or Shrouding to add even more defensive tech, or hell, even on Broodmind, you could up their Strength or Attacks to possibily S6 Rending, which means they threaten just about anything in the game.  Let’s not forget the Patriarch.  Just on his own, he pumps out 5 attacks at Rending S7, AP3 at I7 in melee, and well, that’s not bad plus a level 1 Psyker for 90 points base.  Also, thanks to being GSC, the Patriarch can automatically shunt wounds to his unit, even in a challenge, so really, he has 20 ablative wounds at all times.   If you take this formation as part of the GSC Decurion, you can also heal D6 models when the Genestealers go back into reserve.

Now, the one thing you absolutely want from this formation is for a chance to get assault grenades.  With that, this big unit of Genestealers are absolutely brutal.  While Rage or Poison can do some work, nothing is sweeter than assault grenades for this unit.  The only reason to not want grenades is because your Warlord is a Patriarch and he rolled grenades for him and his unit.  If that does happen, then Rage or Poison is super effective.

Wow, so this is just bonkers good.

It is, but it has a few key limitations.  First, because it is GSC, it relies on good rolls on the Cult Ambush chart to maximize its power.  This unit has to be in melee to do work, and while a Patriarch with Scream can do a bit of damage at range, really, this unit is about getting into melee.  This means if you roll a 6 with it, you will likely land a crippling blow on your opponent.  If you don’t roll a 6, you have to wait a turn for this unit do anything useful, and if you roll badly enough, you may have to wait 2 turns as the unit has to go back into hiding to get another chance at a good Cult Ambush result. If you roll crappy, a savvy player can place a throwaway unit within 6 inches just to make sure that they cannot go back into reserve for yet another turn.

This unit also lacks Hit and Run, and it is a big unit, and while it pumps out the pain, there are still units that can hold it for a turn or two, and again, that’s all wasted potential.  This unit needs to be swinging in melee on high threat units to win, and if it is stuck in a meaningless combat, it is just not being effective. Coupled with this, while this unit can do a lot of damage, it is not going to beat dedicated deathstars, especially psychic ones.  It pumps out enough attacks to do damage, and it gets to hit first, but it lacks the ability to cancel out the enemy buffs and lacks the inherent ability to reroll to get past the usual Invisibility.  That said, a full First Curse can really hurt a lot of Deathstars, especially with a Primus near by to give them that reroll to hit, but if the target is powered up, chances are the Deathstar is going to win.  Also, unless you roll that 6, most Deathstars are faster, so the First Curse will get charged rather than charging. 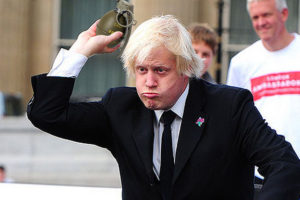 Lastly, if the First Curse doesn’t get assault grenades, then I6 means nothing.  Why one of the most storied and feared assault units in the history of 40K doesn’t come stock with assault grenades still baffles me, and while this formation can help out, it is still only a 1 in 3 chance you get it.  If you take a Patriarch as Warlord and roll for its Warlord Trait, the odds go up a bit, but in general, you really suffer with this unit if you don’t have the grenades.

Ok all, so that’s First Curse.  If you have many, many Genstealers gathering dust, time to break them out! As always, check out that Patreon to help Adam buy his first Frigate to start his pirate life, and if you have a formation you want covered, let me know!