Hello everyone, Danny here to speak of the great one, the best political satire in 40,000 years, and of course, the biggest, meanest greenskin there is! 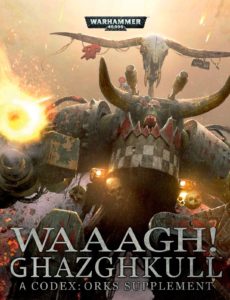 The Formation: Council of Waagh!

The Nobz unit must be equipped with a Waagh! banner.

Banner of da Great Waaagh!: As long as Banner is there, all models in the unit are Fearless and add 1 to their WS. All friendly Orks within 12 reroll failed Morale and Pinning checks.

Ghazghkull’s Leftenuntz: Both of the Ork Warbosses have +1 WS. Also, Ghazghkull rolls twice on the Waaagh! Grazghkull Warlord trait table and uses both (rerolling duplicates) in addition to his normal Warlord Trait. 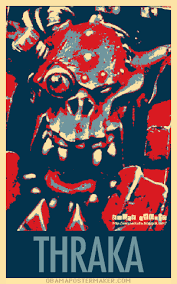 So if you want all the independent characters in one large squad of doom, here you go.  You get 4 HQ choices and a LoW with one unit of filler.  If you want Powerklaws, you are going to get Powerklaws here, so this is a unit that immediately starts pumping out a lot of S10.

The bonus to WS is not bad, especially considering that the Warbosses are getting +2 WS, so suddenly you have a lot of WS7 in the unit.  Ghaz goes up to WS7 as well, so you are getting a pretty damn accurate unit with an average WS of 5 (or even higher depending on many Nobs are alive).

Having the whole unit together and Fearless is not bad although Grotsnik gives you Fearless already, but the Nobz do give you access to transports, namely a Battlewagon, which is key. 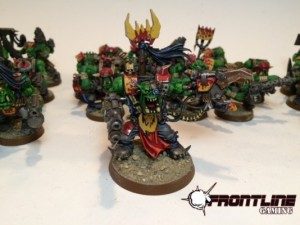 Ok, so is this good?

Well, it can kick some ass, let me tell you.  Ghazghkull is a pretty decent melee fighter with S10, T5, Eternal Warrior, and 5 attacks base.  Boosting him to WS7 and giving him Feel No Pain makes him even better, and once per game (or if you using the Ork Decurion, you could get this every turn after the first) you can get a 2++ for ultimate tanking.

Mad Dok isn’t a slouch either with now WS6 and a S8 Powerklaw.  The Warbosses are both WS7 and can easily equip to S10 each.  They also bring out some wargear that can help like the Lucky Stikk. Even the Big Mek can get up to S8 as well as bring some funky wargear.  The key here is the Big Mek can bring fun toys like the Mega-Force Field for some much needed protection against shooting.  Of course, with Nobz, they can all bring PowerKlaws or even Big Choppas for some non-initiative 1 S6 or S7 attacks.  The Nobz also bring access to a Battlewagon, so the Unit has a ride to get into where it needs to be, close combat. 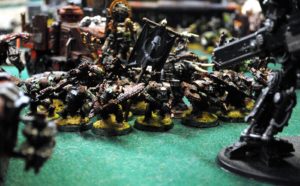 This unit is really quite customizable, and you can make a mean, just gut-punching machine: Ghaz, Mad Dok, a Warboss with Mega-armor and the Lucky Stikk to help tank wounds, a Warboss with Choppa of da Ragnarork for a slowly getting more killy at initiative beatstick, a Big Mek with a Klaw and a Mega Forcefield for a 4++ against shooting, and a meat shield of 5-8 nobs with the Banner and a Battlewagon.  There is a whole of death in that unit that also packs Feel No Pain.

Ok, so why don’t more Ork lists use this?

Well, the scenario I just ran is well over 1,000 points.  This formation is practically an army unto itself. At its base cost, it is 614 points with no upgrades at all.  It gets expensive very quickly, which means it has to perform each and every game, and for a unit that needs to be in melee to perform, this means that well, it is going to let you down.   All of these characters and all of the upgrades just makes this far too expensive to regularly field unless you are going for a super skew of super skew style list that tries to pull a “Gotcha” on your opponent.

Second, this unit has no invulnerable save in close combat, so other dedicated melee units like Wulfen or Thunderwolves are going to rip it apart as well.  I mean, this is a Deathstar, but it lacks any of the truly layered and consistent defenses that Deathstars require.  It can hit like a ton of bricks, but it cannot take any real hits, and when you’ve spent 1000 points in a unit, you need it to take hits.  This is not to say this unit cannot weather some firepower, but any real, dedicated firepower is going to shred it, and that’s bad.

The unit also has no Hit and Run, so it can be tarpitted as while it pumps out a lot of quality, brutal haymakers, it doesn’t throw out enough to chew through zombies or even termagants.  Since it relies on initiative 1 to bring the pain, it is also super vulnerable to stomps.   It also lacks any pyshic defense, which is absolutely necessary in the world.  It needs Invisibility or a way to stop debuffs.  Because of the formation rules, you can’t throw in a few Weirdboyz to help out.

So overall, you have an expensive, slow, not very tough deathstar that costs as much if not more than others.  Ok, so this is why it is bad, but hell, it is still fun as hell, and if you are playing Orks, aren’t you really much more interested in fun over winning?

As always, check out the Patreon, and feel free to suggest any formations that you want to see!