Howdy everybody, Danny here with my usual spot-light on formations, and today, we’ll look at an oldie but goldie, somewhat out of favor due to a new replacement: The Adamantine Lance! 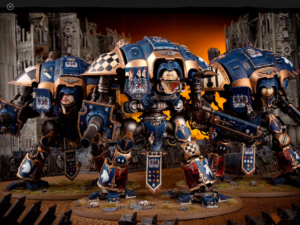 3 Knight Errants and/or Paladins in any combination

So what you have here is a quick, self-contained way to add three giant, stompy robots to your army that act as a close-support firegroup, all with some nice bonuses. This is one of the oldest formations, two years old now as if this article, and it really shook the game when it dropped. This is far different than the Baronial Court formation out of the Imperial Knight Codex as you are really limited in your choices, but the bonuses are distinct (and one could argue stronger in the Adamantine Lance).

Ok, 3 knights seems too good. Didn’t this get banned? 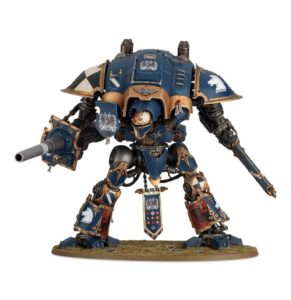 It is good, and yes, it was banned in several formats, but in ITC, it is still quite legal. The big points to cover is that it adds a lot more durability to each Knight when they keep in a close formation. A rerollable 4+ save equals 75% damage mitigation. This is noticeably better than the +1 bonus that Baronial Court gives as a 3+ save is 67% damage mitigation. Right off the bat, you suddenly have a much more durable Knight that shrugs off 3 out of 4 hits that manage to damage AV13 to the front. The downside versus Baronial Court is that their bonus triggers within 6 inches, so you get far more movement flexibility.

Baronial Court grants Overwatch and Counter-Attack, which is solid defense, but Adamantine Lance is awesome for granting far more offense. D3 S10 Hammer of Wrath hits is brutal against any armor, and even against other Knights, the ability to start stripping Hull Points at I10 can easily swing the fight. The reroll charges is also critical as you are spending a lot of points in a single model that you expect to do damage, and rolling a 4 sucks.

With all this in mind, you only have two knights to choose from, the Paladin and Errant. The Paladin is typically my favorite as the double S8, large pie-plate is good for stripping hull-points off of most vehicles or thinning out larger units. The Melta pie-plate will typically score you a penetrating hit, but it is a bit too focused at times. Of course, with all of the new carapace upgrades, throwing on some Rocket Pods for even more S8 can really help in popping transports or weakening an enemy Superheavy. Two Paladins with Rocket Pods and their Double-shot Battle-Cannon can feasibly strip an enemy Knight down to just a few hull points that are suddenly gone at I10 with the D3 Hammer of Wrath hits.

Of course, these are still Knights, so they bring Stomp (which is just a puncher’s chance to just eviscerate a deathstar), and they bring a melee D-weapon at I4. This makes them scary in combat to say the least. 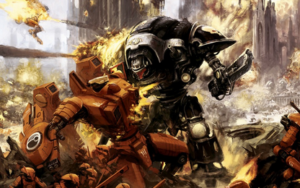 Ok, so why isn’t this just dominant on the table top?

Well, this formation has a few key weaknesses. The first is that it is limited by the 3 inch aura of bonuses. These 3 Knights need to hang out close and work in concert for this to really make it worth it, but the problem is that they are thus really restricted in movement. This formation can dominate the center or a flank, but it lacks a lot of agility and the ability to separate off to control the whole board. Any fast moving units can easily go around them and start forcing the Knights to start splitting up (which weakens them greatly) or having to sacrifice the board position and likely the maelstrom mission.

Another issue is cost: this is easily going to run you a bit less than 1200 points, and if you start taking carapace upgrades, it will easily surpass 1200. That’s a huge chunk of your army that doesn’t have Objective Secured, can be tarpitted, and well, can still die to a lucky D-shot or being seized on. This is a typical Eggs in One Basket type of scenario, with all of those downsides. The Knights also lack the ability to really effectively clear chaff, so even a unit of Scouts stretched out can force a Knight to waste movement going around or waste shots on removing them. A 30 gant squad or an AM conscript platoon can easily lock these Knights down for turns. With only 650 points, you don’t have much room in the army build stage to complement these Knights.

The lack of versatility hurts as Paladins are great, but a Gallant could be nice to save points, or a Crusader for even more fire-power to help clear out chaff. Baronial Court gives you far more flexibility here, and that can really be the difference in a game.

As with any Superheavy, you are putting a lot of investment into a single unit, which means that unit must do work, and well, sometimes that just doesn’t happen. While this formation can absolutely blow through middle-tier army builds, the top armies and top players can easily exploit the major weaknesses here.

So there you go all. As always, check out our Patreon to help create more fresh takes, and if you have a formation you want in the spotlight, please let us know!