Hey everyone! Adam here to  talk about my current army, Renegades & Heretics!

As most listeners know I play chaos in all it’s forms. From Chaos Space Marines to Daemons and now Renegades. Although it started out as a temporary army until my Mentor Legion was ready, I have quickly become enamored with it. With a lot of cheap, but effective, units it is a good and flavorful army to play.

Currently I am running the following at 1850 points. 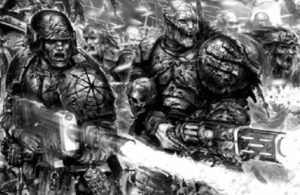 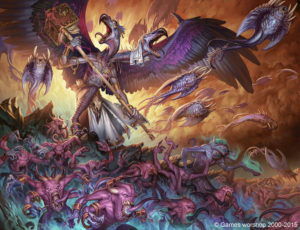 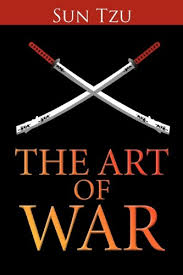 My warlord is from the Renegades CAD. He has Covenant of Nurgle, which unlocks the Plague Zombies, and Ordnance Tyrant. The nice thing about Ordnance Tyrant is that it allows me to shift around the unit types of my various artillery pieces. So my Heavy Ordnance Battery and Wyverns become Elites, and my Field Artillery becomes non-compulsory Troops. What this does is leave me with only my Rapier Battery as my only real Heavy Support, so in a mission like “Big Guns Never Tire” I only give up 1 point if they are destroyed.

The troops are 120 zombies that basically protect my backfield and act as fodder in case any real dangerous units, i.e. Wraithknights, get too close. They are all toughness 3, no armor, and no leadership value. Their benefits are fearless, and, probably most important, a 4+ feel no pain.  They re essentially my tar pit units. This is important as one of the benefits of Ordnance Tyrant is that I am able to target enemy units in close combat with blast weapons, Even if I end up hitting some of my own models. This ability can come in very handy in helping the zombies have an edge in close combat. now, there is he risk of me hurting the zombies more than the enemy but then that’s a risk I’m willing to take.

The other troop is the field artillery. The goodness of a CAD means that even this unit, along with the zombies, are objective secured (obsec) so they can hold objectives again most other formations and are very difficult to shift.

The potential devastation from the artillery cannot be undersold. I have 3 S9 AP2 Ordnance Laser Destroyer shots, the Wyverns (S4, ignore cover) put out 8 small blast, the Field Artillery(S5 AP5) 12 small blast, 2 S9 AP3 Earthshakers and 2 S8 AP3 Large blast from the Chaos Knight. It is a lot of damage output that almost requires my opponents to go first if they cannot null deploy. My record on the number of hits is 52 with the field artillery. They and the Wyverns often compete for Star of the Match.

The Void Shield Generator (VSG) is a must for this army, especially the way ITC currently rules its interaction with most special weapons. Even when the GW FAQs go official, I still think the VSG is worth it’s points.

The Daemon CAD provides me the mobility that I am lacking with the renegades. With this army I always roll on Daemonic-Maelific table. My main goal is to get any of the powers except Dark Flame and Doom Bolt. Cursed Earth helps me get that sweet 2++ with a reroll for my Tzeentch Knight and the rest allows me to summon in more units.The Tzeentch herald has the Grimoire for the Chaos knight and the Nurgle Herald has the Doomsday Bell in order to give the enemy -1 leadership to their whole army.

The Chaos Knight gives me a very strong counter for any units that get too close the my VSG and firebase. I actually rarely charge forward with it as most opponents end up coming towards me. As a result I can still keep the Knight within VSG range and use the Grimoire to make it’s save better. If I have the cursed earth power I use that to either improve it’s save or to mitigate the damage because I failed my Grimoire roll.

So, in general the battle plan stays the same, no matter what I’m up against. Place my objectives on one side of the table. Castle around the VSG near those objectives. Use the zombies as a screen for my artillery. Book and cursed earth the Knight when possible. Use the Knight as a counter attack unit. Dirge casters on the Chaos Knight makes this extremely easy as units within 6″ of the Knight cannot overwatch. If playing against another mainly shooting army, then charge the Knight forward. Always deep strike the pink horrors into your opponents backfield. Start summoning additional units as needed.

Its highly dependent on the Grimoire but I can’t use Fateweaver in the ITC format as this puts my points so that Chaos Daemons become my primary faction. The psychic phase can swing  a bit, but the resilience of the zombies and Chaos Knight, in most cases, allows me to last until the psychic phase picks up. Target Priority and placement of the daemons, that deep strike and are summoned, are very important. 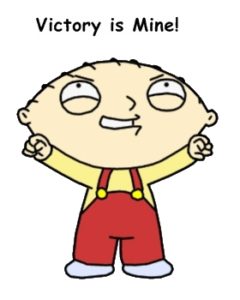 And that’s the plan, absorb the initial hit, counter with the Knight and zombies, if necessary, and hit their backfield. So far it has worked out really well. In the last 4 tournaments I have gone a combined 8-1-3 with my only loss to a monster suit Tau list and that just came down to who went first.

Hope you enjoyed the article and good luck in your games!