Danny here to wax poetic about FAQs, ETCs, ITCs, and everything in between.

It strikes me as odd that we play a game like 40k, spend lots of time and money on it, but we are also seem to spend a good deal of time placing restrictions on how or who we can play. Ideally, going to a pick-up game at your local gamestore should be the same as traveling somewhere else to play a tournament, but oh no, it is not. People rally around their chosen format like its the gospel truth of 40k, but at the end of the day, it just seems to make it harder to play the game, not easier.

When looking at 40K, we know that blackholes exist in the rules. There are just too many different sources of rules written by different people, from different editions, and compiled in a pretty slapdash manner. English is a crappy language sometimes, and so true academic precision is ungainly and difficult to decipher. So what do we do? How do we attempt to create community events that encourage players from all over the world to interact and play without issue? We have GW pumping out FAQs, but at the time of this article, none of them are “official”, and even some of the rulings create more problems (cough-droppods-cough).

For me, there are three primary methods for creating community-driven models to make the game easier to just pick up and play, regardless of where you are and who you know.

So in this model, rule issues would be handled by a committee of some sort. How this committee is created is a whole other conversation, but assuming that one is created, the committee would be responsible for looking at the rules, sorting out the issues, and creating a coherent FAQ/Rewrite that solves problems.

What do we get from this? When the committee is comprised of noble, well-versed individuals, a lot of decisions can be made quickly and effectively as there is only a small group who have the burden of sorting all of this out. Since entrance in the committee would (hopefully) be reliant on demonstration of mastery of the rules, strong critical thinking skills, and a neutral perspective, the members of the committee are individuals who have dedicated a greater portion of their free time into engaging this hobby. In short, decisions are not made by those who lack understanding of the nuances of those decisions and their impact.

What’s the problem? Well, it is easy for a system like this to degrade into a clique where certain metas and certain builds are heavily favored due to the bias of the committee. Certain voices or personalities may take over, and suddenly only a few people really have control over decisions that could impact many others. Lobbying and petitioning from friends could sway decisions, and in general, the average person is somewhat at the mercy of individuals that are far removed from them.

In this model, rule issues are put out to a vote by the general public. Any contentious issues would need to be brought to the community’s attention by some kind of facilitating body, and then a vote is held to decide these issues; thus, any FAQ or ruling that is created is driven by the people impacted.

Pros? Each person has the ability to decide how they want the game to work, and so the final product is much more built around what the average person would want or sees to be true, thus appealing to the most people. This is the most “fair” manner in one sense as each person involved has equal power to make a decision, and the freedom of choice is respected for the population at large. This allows you create more inclusive environments for a playerbase as each player can have an impact on how the game works in a larger setting and voices from other groups are brought in (like less-competitive groups). The will of the people is expressed as opposed to the will of select individuals.

Cons? Well, first it is logistically difficult. There needs to be a body to organize votes, maintain the FAQ, and all that good stuff. This is not easy nor is it necessarily a valued position as any votes that go against a population will likely create backlash that is absorbed by the organization. Second, people don’t always make the best decisions, and many, many people do not study 40k or any game system like they have a test on it. The herd-mentality can generate obviously flawed or biased perspectives, and individuals with a wide-ranging soapbox have considerable power to sway public opinion (thus weakening one of the advantages of this system, equality). Votes can become just media-driven popularity contests, and each individual has more of a responsibility to be educated on votes before they are made (and this a hobby after all, so we can’t be too hard on people who don’t spend hours thinking about it every day). Lastly, this requires participation on a large scale to really work, so if only a small group of individuals are active at the polls, their biases will have more impact.

In this model, it’s a free for all. Each TO and tourney is a unique entity that makes decisions as they see fit, or each decision defaults to a Jervis (as detailed in the rulebook and sometimes in the FAQs themselves). Essentially, this is playing “pure” 40k where there are no outside rulings or information limiting or clarifying the main rulebook outside of officially sanctioned FAQs.

What is beneficial from this model is that it is actually the most unified: It relies entirely on the rulebook, which all players have (or really should have). There is no need to worry about what a separate body agreed or who voted which way; it is all there in black and white in the rulebook and codexes. If you are new in town or traveling to a tournament from out of state (or country), you know that expectations and requirements because they are right there in the rulebook.

The problems that arise from such a system is that each game is going to be a unique instance of rules application. While this form is unified in the rules, it is not unified in how these apply, even on a game by game basis. Because you win the Jervis roll-off, your rules-interaction-rube-goldberg-machine of death can do its first turn charge whackiness, but because you lost the Jervis in game 2, they don’t. Well, that’s a bit different to say the least. Can you build Unbound? Can I have 10 sources in my army? Can you use Forgeworld armies? Which ones? What happens in the rules from the Forgeworld armies was written for another edition? Do you use Escalation? Death from the Skies? These are GW products and rules, but do you use them since they are not directly expressed in the main rulebook. If it is up to each TO to make those decisions, suddenly you have hundreds of unique FAQs essentially as each TO is making a judgment call on how to apply these rules, so the unified bonus of this system is invalidated by the fact that each tournament is its own little universe, so being able to travel outside of your meta becomes difficult. If we play truly “pure” 40k in the sense of no 3rd party FAQ whatsoever and no overarching TO rulings and rely on the Jervis, then quite simply, every game is a unique instance of rules application, so there is no unity at all.

So which do we use? 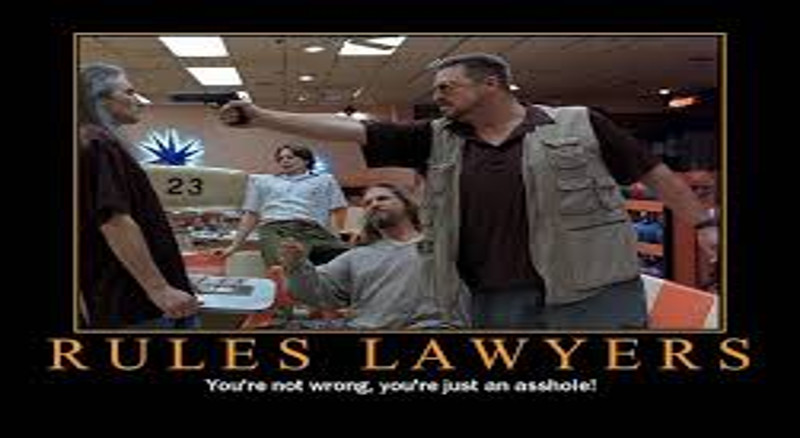 That is the toughest of questions. From my view, option 3 is immediately out the window. The entire benefit of the Mad Max style of 40k is that every player is beholden to the rulebook in a concrete way, so there is no need to worry about local interpretations, except that is exactly what ends up happening. Each TO creates their own FAQ (via judge rulings) or each game is reliant on the Jervis technique to resolve disputes, which creates a chaotic gamestate where one list will excel in one game but fall apart in another because a mechanic behind it is questioned and one player wins the roll-off.

Option 1 and 2 both have big pros and cons, so my answer is a blending of both. Perhaps the council of elders is elected for specific amounts of time; thus, each individual has some power in deciding who represents them. Perhaps there are limits to how many times a person can serve or how many individuals from certain metas can be on the council, ensuring that separate metas always have a voice. Major rule questions can be petitioned in order to inform the council how players feel and what they want. Perhaps even by a vote, decisions can be overturned. This gives a balance as most rules questions can be quickly decided by the council while truly contentious decisions can be overturned if the majority of the players decide it does not work for them. This approach helps blend the benefits of both option 1 and 2 while attempting to minimize the problems. We all know no system is perfect, and problems can arise, but from my view, this is the best way to create a unified independent FAQ for 40k, uniting as much of the player player-base as possible.

Of course, this requires people to talk to each other and accept that maybe they aren’t the end all-be-all authority on the game, so we’ll see how that goes.