Hey all, SaltyJohn here to continue my discussion of mission design. Last week, I discussed the problem with slow play in the current era of competitive 40k and what I think is the root cause of this issue. To me, it is simple: mission design.

The current missions for 40k are designed with objectives and end of game scenarios that reward players for playing slowly and having games finish in earlier turns rather than going on for 5-7 turns. In that article, I discussed the idea of First Past the Post Mission design and how I feel that mechanic would benefit the community as a whole and discourage slow play by encouraging players to complete the missions.

So how exactly would this work and how drastic would the changes be to the mission templates themselves? I went ahead and designed several missions around the First Past the Post mechanic, 5 to be exact, and used the ITC Missions template. It is a single page template explaining the mission and providing a space to track points during the game. It is simple, sequential, and relatively intuitive. Plus, it is one of the most popular sets of competitive missions available. To discuss further, let’s take a look at one of these missions that I made.

Step 1. Adjust and define terrain with your opponent.

Step 5. Roll for Warlord traits per usual in the BRB Pg. 124. Do not use the Tactical Traits table. If your opponent has a LoW and you do not, you can roll on the Escalation Warlord table (pg.34 of the Escalation Supplement).

Step 7. Roll for first turn. The player that wins the roll can choose to go first or second. The player going first then deploys first and goes first unless the other player seizes the initiative. If a player chooses to go second they may not attempt to Seize the Initiative.

Scoring: At the end of each player turn, a player scores 1 point for holding an objective. Objectives are held as outlined in the 40k Rulebook; however, a unit cannot hold and/or contest more than one objective at a time. Both players can score points, whether it is their turn or not. The first player to score 18 points wins. If neither player has scored 18 points by the end of turn 7 or time is called, the game is a draw. 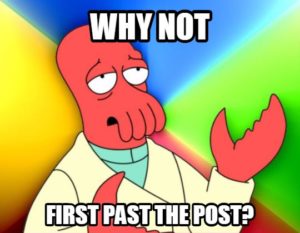 The benefits of a system like this are that it encourages players to play each turn to achieve a goal, and it is less open to being gamed by slow play. With both players scoring at the end of each player turn, the goal of attaining 18 points is more manageable. This is somewhat similar to the way the modified Maelstrom objectives currently work in ITC with a few important differences.

There is no rolling for the objectives here which are then coupled to a separate missions objectives, which can cause players to have to choose between trying for a Primary or Secondary missions win. These choices become problematic and inherently slow the game down; they also provide an incentive for players to slow play to end the game in the turn most favorable to their win conditions. Often times thinking through these dilemmas, then working through them in game, and adjusting to the randomness of the game itself can eat up the clock as well. A single set of game ending criteria, or objectives, will speed up the pace of the game and create a situation where players are rewarded for attempting to finish the game with fidelity.

The current mission designs do not reward players for finishing games, or even attempting to finish games with fidelity. The current missions, not just ITC but all 40k missions, are designed in a way that rewards players for building lists that have early turn dominance. By building a new set of missions that can be added to the current set where the players are rewarded and encouraged to play later in the game, the entire meta of the game can be shifted to a more positive place. Players will adjust the list meta into more Take All Comers (TAC) style lists that can withstand several turns of attrition. The player interaction meta will also shift to a place that is less reliant on gambling for a conclusion in the early turns and precipitating slow play. 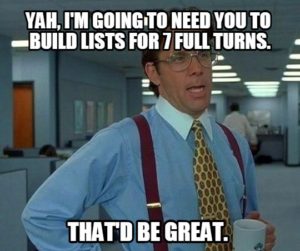 Interestingly, the First Past the Post design is used in the Age of Sigmar “Matched Play” missions. If 8th edition 40k is indeed coming down the pipe, and if it is simplified as it is rumored to be, with a match play set of missions and rules also rumored, then this whole thing may be a moot point. I am optimistic about the future of 40k in the new era of post-Kirby GW and with what we saw from the General’s Handbook for Age of Sigmar.

This week I tested out the mission above for a battle report. Check it out!

Editorial: Can you see the Matrix?