Hey all, Danny here as usual, and sorry for missing last week, but a baby with a stomach flu is an act of God.  To make up for it, today I am going to look at my least favorite faction, but the most popular one, Space Marines, and let’s dig into what these new Chapters Tactics do and how they dictate an optimal army build. 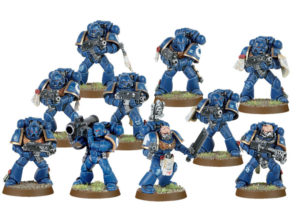 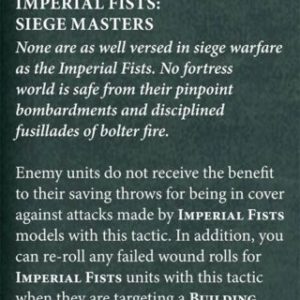 So, Imperial Fists Chapter Tactics are pretty thematic in the sense that they get to reroll wounds against buildings, which makes sense.  This is very much a nod to the fluff more than any real impact although in some few cases, it could be nice.  Really, the bigger deal is that all units with Chapter Tactics Ignore Cover.  This is something far more dependable and far more impactful.   Having even basic bolters deny cover means that you can flush out units like Scouts or Lictors with just about any weapon, and for the heavier weapons, it means that Missile Launchers and Lascannons are really going to punch through any unit.

For me, if you want to play IF, you want to bring a lot of ranged firepower, well, like almost all Space Marines. What IF get the most mileage out of are weapons that have ok (but not great) AP but high rate of fire like Assault Cannons, Missile Launchers, and Heavy Bolters.  IF are great for whittling down infantry, and if you set up in a bunker, your Devastators get the benefit of cover while their targets do not.  This can certainly help them win the long-range attrition war.

Would I take this Chapter Tactic over any other? Eh. Not really.  Ignoring cover is cool, but in our games, cover hasn’t been that huge of an issue, and well, lascannons still punch through easy enough.  If you can paint yellow and love IF (Hi, Paul), go for it, but sadly, this lacks the real shine of some of the others. 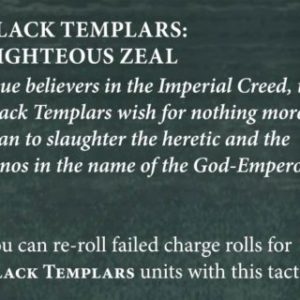 So, the Black Templars have the simplest Chapter Tactic, but it definitely fits. Free rerolls to charges! What is important about this is two fold: First, it makes any assault unit that can arrive via Deepstrike far more viable like Assault Terminators, Assault Marines, or even the new Reivers. Second, unlike using the re-roll CP, you can reroll both dice in the roll, meaning if you roll snake eyes, you get to try again clean rather than praying for a 6. Of course, if you roll a 6 and a 1, you can still use the CP instead to reroll the 1 to fish for the long bomb charge.

Without codex in hand, it is hard to say how strong the melee elements in Space Marines are, but Assault Centurions pump out a godly amount of high powered attacks, and with their shooting, they can clear through chaff too.  It is a bit too early to say whether SM can viably build a melee list, but if you want to, this is absolutely your go-to.

Bottom line: if you want to play Space Marines and want to punch people to death, this is your choice. 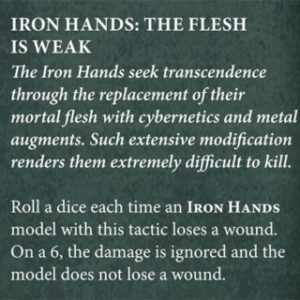 So, this is essentially a 6+ Feel No Pain roll, or rather, every model in your army with Chapter Tactics has that Warlord trait.  What does this do? It essentially increases the durability of a model by 16%, which doesn’t sound like a lot, but that can add up big time.  As GW pointed out, Dreadnoughts, having the most wounds of any model with Chapter Tactics, really get the most benefit from this, but so do any multi-wound models like Centurions or even Primaris Marines.   You could even go the other way by taking lots of Scouts and flooding the board with a bunch of models that have a 1 in 6 chance of refusing to die.

This Chapter Tactic combos well if you want an ultra-durable army of walkers.  Being able to repair Dreadnoughts and having a layered defense can make them exceedingly difficult to kill, and really, if you are dead set on trying to run a pure Primaris force, this is one of the better Chapter Tactics to help you out, especially with a few Apothecaries somewhere.

So in the end, this isn’t too bad, but it certainly forces you into specific builds, either Dreadnoughts or as many multi-wound models as possible. 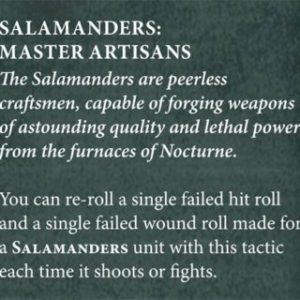 So long Flamecraft, but that’s ok, because rerolling a single hit or wound roll on a unit of Devastators with lascannons is good.  In terms of raw dice-fixing and controlling the percentages, this is the best Chapter Tactic to take.   Notice that it says shoots or fights, so any low number+high power attack gets a lot of mileage out of this.  Again, Lascannons that get to reroll, drop meltas, and powerfists are loving this, especially since it means that you can send out units away from Chapter Masters and their reroll aura and still get some decent returns.

You can also do some fun counter-tech by bringing 5 man tactical squads with a single melta, and well, that reroll is all of that dude. This certainly makes that melta gun far more reliable to do what it needs to do, and against say a Knight, your chance of hitting and wounding goes from a 33% to a 65% for a lone melta shot.  That’s not bad if you start bringing lots of small units that are just delivering that high powered shot.  Of course, anything that packs a a lascannon or powerfist also loves this to make sure you are sticking at least one of those big hits.

If you want to ensure that your dice are less prone to totally screw you, this is a good tactic to take. Is it better than Bobby G and his Boys? No…not even close. 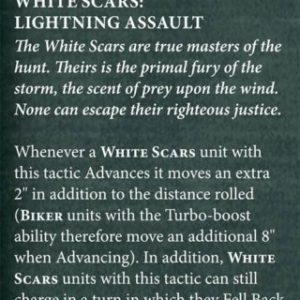 Do you like Bikes? Well, White Scars are your way to go. The extra 2 inch gives them a lot of scenario play, and with assault weapons, it is really an extra 2 inches of range. This really makes flamers range 10, which can matter quite a bit.   The fall back and charge isn’t too bad either as it essentially means that assault marines can be hit by a unit of chaff and then jump over them next turn and charge deeper into enemy lines. Even Bikes with can still move fast enough to get around a screening unit and charge into the sweeter meat deeper in the enemy’s lines.

White Scars want Bikes, which are great for last minute bursts of speed to grab objectives, but assault marines get a huge boost here with the ability to leap over enemy units on the Fall Back and get deeper into enemy lines.  If you can take flamers, take flamers here as being able to get a final burst of speed to get closer to the enemy to lay on the death is great.

Is this the best tactic? No.  Is it better than most? Eh, I’m not too sure, but it does allow for a lot of tactical flexibility that a very savvy general can exploit. 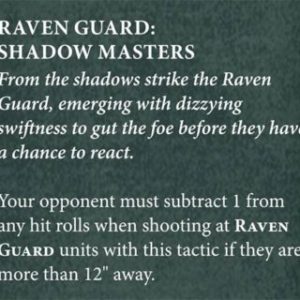 Yep. This is good.  In a game where reroll auras are pretty damn good, this is a great answer to them.  Negative modifiers are hugely powerful, so by having most of your army rocking this, it really allows Raven Guard to create some brutal shooting lists that are more durable.   While I think of Raven Guard as assault oriented with lightning strikes for the sky, this Chapter Tactic really pushes them towards a shooting gunline or at least with a strong shooting firebase.

Devastators with this CT can comfortably sit in cover, lay down fire, and any return fire is going to have a much harder time to hit.  If we take the standard Roboute gunline of doom, they now have an auto-miss on a 3 (a 3 cannot be rerolled as it hits but will be modified to a 2 and therefore miss after the reroll), so yah, you are already weakening what that list is designed to do, fix the odds.  Scouts with camo-cloaks are even harder to dislodge from backfield objectives, and overall, you have an army that can sit back and snipe with little fear.

If you want to run a gunline but not get called out for taking Rowboat, here is your answer. 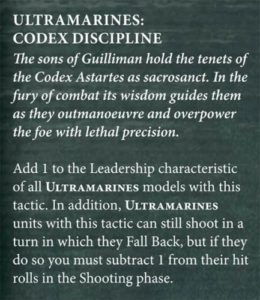 So the first spoiled, and arguably, the strongest.  A flat +1 to leadership is a nice perk. It is not exceptionally amazing as leadership really matters the most with units of 10+ models, which are rare in a Space Marine army, but it is never a bad thing either.  The real money that got everyone in a hissy-fit is that Ultramarines can walk out of combat and still shoot.   They essentially get a weaker version of Fly, and T’au are pretty pissed.

On its own, this is a good but not great chapter tactic.  Being able to walk out of combat and still shoot really ensures that a gunline can survive being tied up, and while the -1 hurts, at a standard BS of 3+, it is not exceedingly painful either.   What really makes this Chapter Tactic amazing is big bad Bobby G. The Ultramarine gunline is absolutely a top-tier list, and now, they have another tool to ensure that they are shooting.  Even if you get past the chaff line and manage to tie up several units of devastators, they can walk away and open fire, and sure, they may be hitting on 5s, but with Bobby’s reroll, that’s like ever so slightly better 4s, plus the reroll to wound.  That’s still a lot of heat coming back at you, and again, this is after you’ve already weathered incoming fire.

Is this the best? Yes, if you are dedicated to taking the Bobby G gunline.  If you don’t want that, Raven Guard is the best all around tactic, and if you want to play assault, take Templars, and if you want stompy robots or maybe Primaris marines, take Iron Hands.  The others? Well, you have to have a vision, and you need to accept you are dark horsing it, so you may not get the raw power of some of the others, but hey, play the game, yah?

Thanks as always, and sorry for the delay, and let us know how your experience goes with these new Chapter Tactics and the very first true Codex of 8th edition!  Make sure to check us out at Twitch, Facebook, and of course, we love all of our Patreon supports, but we could love even more people. We’re passionate that way.