Hey all, Danny here, and sorry for missing last week, but real life is real life.  This week, I am going to look at formation that makes heavy use of a 3D printer!

Malicious Self-immolation:  At the start of the fight sub-phase, any unit of Brimstones can blow themselves up, inflicting D3 S4 AP4 hits with Warpflame for each model sacrificed.  These autohits strike every enemy unit locked in combat with the Brimstones.

Sea of Living Flame: If an enemy unit successfully charges a unit from this formation that is within 9 inches of the Exalted Flamer, the charging unit must take a dangerous terrain test.

Ok, so do you have dozens upon dozens of Brimstone Horrors? Do you have a 3D printer? If so, then this is the formation for you.  The Exalted Flamer is well a tax, but easy to get, especially if you follow Travis’ plan to turn one Chariot of Tzeentch into several Exalted Flamers and a few horrors.  The real meat here is being able to take up to 180 bases of Brimstone Horrors! When you get to spam of this level, you really are *ahem* cooking with gas now. 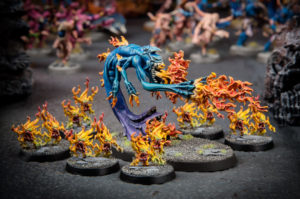 Well, yes.  They are one of the most point efficient units in the game, and if you want pure psychic batteries, you can get 1 warp charge per 30 points.  That’s pretty crazy on a unit, not a character with Mastery Levels.   As many Daemon players know, paying 60 points for CAD requirements and +2 warp charge is really nice, plus all the usual fun of a Daemon unit with Deep Strike and a 5++ reroll 1s standard.

In this formation, you get up to 9 units, so at minimum, that’s 9 warp charge for 270 points.  That’s one hell of a bargain.  With the extra bonus of being able to blow up, that actually makes them not quite as easy to deal with as before.  Any chaff unit suddenly has to worry that if they go in for the easy kill that they will die, so now you are piece trading, and well, psychic Daemons piece trade better than just about anyone else, so that’s a real losing proposition.  Hell, if you go crazy, 10 D3 S4 AP4 hits is still nothing to sneeze at for even more hardened units as forcing saves is a tried and true way to kill things, especially since this gets around defense buffs like Invisibility.  If you go crazy and have a unit of 20 (only 60 points), 20D3 hits averages out to 30 S4 hits, and if we follow the math, that kills off a 5 man marine squad.

The other formation bonus is not too bad as Dangerous Terrain checks can be funny, especially against mega-units like Wolftide/Greentide.  The Flamer of Tzeentch is the tax here, but at only 50 a pop, who cares?

If you really dedicate to this, you can have 180 possible D3 S4 AP4 hits that also generate 9 Warp Charge for only 560 points.  That’s insane.   That is plenty of room for Daemon Princes, Fateweaver, Belakor, or Magnus.

Well, it is because Brimstones are stupid good.  They are absolutely one of the best Troops in the game, and if taken in a CAD, they are even Obsec.  But there must be balance in all things, usually, and well, this formation does have a few weaknesses to exploit.

First, it dies and dies to shooting.  At T1, pretty much anything but Dark Eldar (sad trombone) is wounding them on a 2+ and Instant Killing them.  Even massed lasgun fire will make Imperial Guard players feel like supermen.  These units just die in droves to any standard fire, and any volume of fire attack is going to cripple them quickly and easily.  They are going to have to rely on good cover saves to mitigate the worst of it, and again, any ranged attack that isn’t S1 poisoned is going to just stack wounds on wounds on these little buggers.   That’s the thing, if you have any shooting at all, it will start to pick these guys up easy.

Second, they are slow.  Once they Deepstrike in, they are just standard infantry, so they won’t be able to redeploy and respond to the shifting landscape of the game.  A faster army can exploit this by moving away, staying away from the little bombers while also whittling them away with random gunfire.  A Daemon player would have to get pretty lucky with Deep Strike rolls to really be able to box in a unit.

Third, S4 is good, but there are still plenty of units that will shrug this off.  The whole idea is to piece-trade with these Brimstones, but there are still plenty of durable units like Wraithknights, standard deathstars, Knights, etc, that just don’t care at all.  Granted, having 300-1000 points fighting at most 60 point units is a net win for the daemon player, but you’d be surprised how quickly these bases will disappear under any real return fire.

Lastly, who has 180 bases of them? If you have a 3D printer, maybe.  This is one of those formations that is limited by the real-life game of money, so it is unlikely you’ll see a full formation, but hell, strangers things have happened.

Overall, this can be a brutally efficient piece of a mean, mean army, but it can also make a lowly Guardsmen feel like a king.  As always, thanks for reading, go check out that Patreon, and again, mea culpa for missing a week.